Dehra Dun : Uttarakhand, which boasts of the four important Hindu shrines of Badrinath, Kedarnath, Yamnotri and Gangotri and over 24,000 MW of hydel power potential, which is presently going abegging, has unfortunately become a battlefield of the sages and developmentalists with both locking horns and making politics of issues, other than the prosperity of this small mountain state and its people. 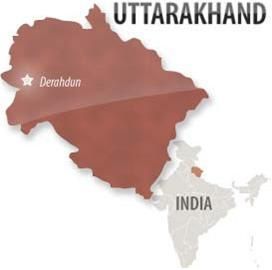 This was very much in evidence when the national vice president of the BJP and sadhvi in her own right, Uma Bharti told newspersons in Hardwar on Sunday that she will go to the Dhari Devi temple along the banks of the Alaknanda, about 16 kms from Srinagar in Garhwal on Monday and in no condition will the temple be allowed to be submerged under the swirling waters of the river when the Srinagar Power project comes through.

Though she hastened to clarify that she and her party is not against developmental works, including power projects coming up in Uttarakhand, but they are definitely opposed to the submerging of the temple, which carries the sentiments of a chunk of the local people, adding that when the detailed project report (DPR) of the project was first made the temple remained unaffected by the waters and only in the second DPR, wherein the dam height is raised has the controversy been created.

Incidentally environmentalist G D Aggarwal who is also known as Swami Gyanswaroop Sanand, had to bear the wrath of the development lobby, which showed him black flags on his arrival at Srinagar on Sunday. Sensing breach of peace, the police did not allow the environmentalist and the group of people with him, to visit the Dhari Devi temple fearing that there could be clash between them and those showing black flags.

Even as both the sides have their version for supporting the construction of the power project or preventing the temple from being submerged, the fact of the situation remains that quite a portion of the work has been done on the power project and stopping it now would mean crores of rupees literally being flushed down the Alaknanada. Those for completion of the project site this and the huge power shortage in Uttarakhand in their favour.

However, those for the temple maintain that had the project promoters in their second DPR clearly shown and mentioned that the Dhari Devi temple would be submerged on increasing the height of the dam, the central authorities perhaps would not have given the necessary clearance. Obviously, their intentions were not very clean, they allege.

Not withstanding the pros and cons to the argument for or against the project, it is a fact that this small mountain state, despite having the huge hydel power potential, remain woefully short of power and almost all cities, towns, hamlets and electrified villages battle power shortage all round the year, not just the summers. Obviously, a compromise has to be reached, which can only be done with both lobbies sitting across the negotiating table and keep the ‘aam aadmi’ in consideration.