Chandigarh: They were of no use to him when he was alive. But when Indian prisoner Sarabjit Singh died after being beaten up inside a Lahore prison, top politicians made sure that they were seen at every occasion associated with his sacrifice. 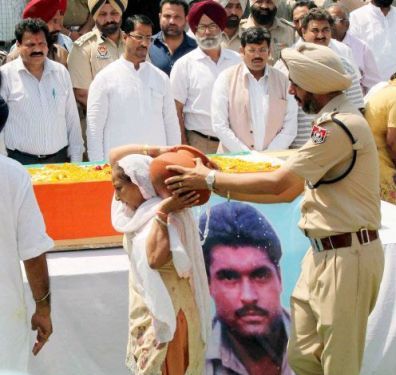 While most of them attended Sarabjit’s cremation, where he was recognised as a “martyr” and cremated with state honours, some also visited his family while they were in New Delhi and the news of his death came from Lahore.

Rahul Gandhi not only met Sarabjit’s sister, Dalbir Kaur, and family in New Delhi but also flew into Bhikhiwind, a small town in Punjab’s border district of Tarn Taran, 50 km from Amritsar, to attend his cremation. Shinde too visited the family in New Delhi.

At the cremation, the political lines were clearly drawn between the ruling Shiromani Akali Dal-Bharatiya Janata Party (BJP) alliance leaders and the opposition Congress.

Even when top leaders were laying wreaths on Sarabjit’s coffin and paying their last respects, top Akali Dal and BJP leaders, including the two Badals, remained on one side, while Rahul Gandhi and the Congress leadership stood on the other side.

A brief exception, though, was that Preneet Kaur was seen standing with the Badals for some time just before Rahul Gandhi arrived.

The Badals and other Akali Dal and BJP leaders were the first to place the wreaths. The Congress leadership had to wait for some time to do as Rahul Gandhi got slightly delayed. TV cameras later showed Gandhi walking some distance in the heat and dust to the cremation ground as his cavalcade was held up in the rush of tens of thousands of people who had gathered to bid farewell to Sarabjit as a national hero.

Before the cremation, Dalbir Kaur, who reached out to everyone possible in the past over two decades to save her brother’s life, lamented that the political leaders who were now consoling her were of little help when Sarabjit was still alive.

With emotions over Sarabjit’s death in Pakistan running high in the country, the central government sent a special Air India flight to Lahore to bring his body back. Two IAF helicopters were kept ready to transport his body from the Amritsar international airport to Bhikhiwind, even at midnight.

Preneet Kaur was present at the Amritsar International Airport to receive the body. Also present was Sukhbir Badal, his brother-in-law and cabinet minister Bikram Singh Majithia and other leaders.

But one man, who right from the beginning till the end, genuinely helped Sarabjit’s family was Raj Kumar Verka, the vice chairman of the National Commission for Scheduled Castes. From getting the family’s visas arranged to go to Pakistan to receiving them and taking them to New Delhi to meet the country’s top leaders and even making them stay in his official residence, Verka, whom Dalbir Kaur calls her brother, helped the family in these trying times.