Shimla: The political scene in Himachal Pradesh has warmed up once again with the two rivals — the ruling Congress and the opposition Bharatiya Janata Party (BJP) — readying for the Mandi Lok Sabha by-election June 23. 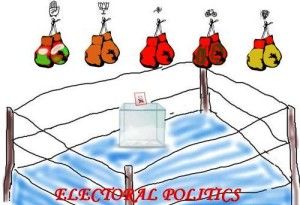 The saffron party, believe political observers, is likely to face a tough challenge as it faced a humiliating defeat in the assembly elections just five months ago.

Congress veteran Virbhadra Singh, who vacated this seat in December after being elected as member of the assembly, had won the Mandi parliamentary seat in the 2009 general elections by defeating BJP’s Maheshwar Singh, now a BJP rebel, with a slender margin of over 13,000 votes.

Before Virbhadra Singh, this parliamentary seat was won by Pratibha Singh in 2004 by 66,566 votes.

He said the party would expose the misdeeds of the Congress governments, both in the state and at the centre.

“This is a government being run and controlled by a coterie of retired officers,” he said.

Satti has charged the government with extending favours to a ski resort project being promoted by Alfred Ford of the Ford Motor Company by ignoring local protests.

The project is located in this parliamentary constituency and local panchayats and environmental activists have started regrouping to voice their discontent against the project, which proposes world-class ski slopes and the construction of five-star hotel chalets near the picturesque resort town of Manali.

While the Congress Thursday launched the election campaign with the filing of nomination papers by Pratibha Singh, the BJP’s Thakur will file his papers June 1.

“The BJP has already lost its mandate in the recent polls. This time it will again be shown the door,” senior Congress leader and former cabinet minister Harsh Mahajan said.

After the filing of the papers a big rally was organised in Mandi town with the top state leadership, including Virbhadra Singh, participating.

Before the election announcement, Virbhadra Singh, 78, has already the constituency’s tribal areas in Chamba and Lahaul-Spiti districts.

Surprisingly, BJP rebel Maheshwar Singh, who in February 2012 launched new political outfit Himachal Lokhit Party, has decided to opt out of the elections this time.

Maheshwar Singh, who won the seat for the BJP in 1989, 1998 and 1999, told his party would oppose the BJP candidate but would not campaign for the Congress.

The Mandi Lok Sabha seat has been a traditional bastion of the Congress all through and it lost it for the first time in 1977.

Another Congress veteran and former telecom minister Sukh Ram was parliamentarian from it in 1984, 1991 and 1996.

The Mandi parliamentary constituency, which includes Kullu, Mandi and some areas of Chamba and Shimla districts, besides the tribal-dominated assembly constituencies of Kinnaur and Lahaul and Spiti, is one of the largest in the country.

Poll officials said the last date for filing nominations is June 5. Votes will be counted June 27.