Shimla: Neglected over time, a drive to clean up the city has police booking violators defacing public property and municipal authorities removing free flowing wires from buildings and trees that are not only dangerous but mar the scenic value of many a views.

About the drive to remove illegal cable, electricity or phone wires, Naresh Thakur, assistant municipal commissioner says, “It’s nothing new; we are only implementing a High Court order.”

The High Court in one of its orders has directed removal of all wires which have been illegally strapped to trees or have used live trees for poles, or are trespassing private or public property that can prove dangerous to be removed, said Thakur.

“Surprisingly some such wires were passing right over the Gaiety Theatre and other heritage buildings in the heart of the city. We have removed them, booked the violators and have billed them for recovery of the labour involved to undo the illegal wiring,” he said. For a start we are clearing the city center including The Ridge and The Mall of these wires, he added.

Finding the MC authorities finally acting upon saving trees from being wired, Anita, a green activists who has campaigned against cruelty towards trees says, “a stern message should go out that suffocating trees with wires would not be tolerated. It’s good to know that there is a law that does not allow it.” 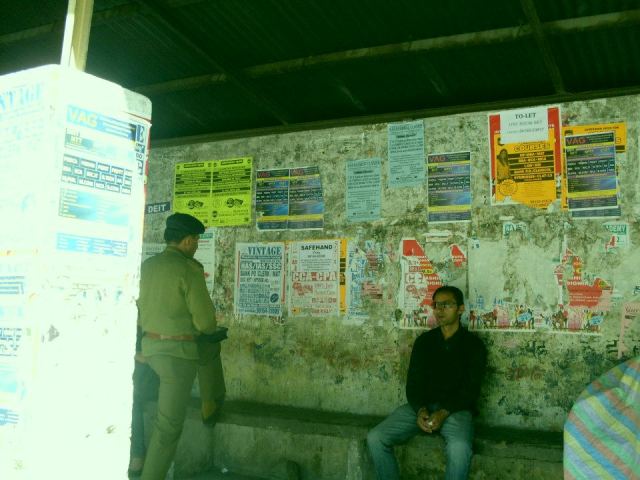 Littering of public property with unsolicited posters, announcements and advertisements has attracted the attention of city police, who after noting down the addresses of the violators from the material posted out have started booking them.

Police chief Abhishek Dular said, “more than 50 organisations have been booked under section 114 of HP Police Act for defacement of public property. The offender attracts a fine up to Rs 5000/-.”

Dular, who is an IIT Delhi graduate, has a Shimla Police page on Facebook where pictures of some of the offending organizations have been posted.

On learning about the police drive, many have started erasing the posters and other offending material pasted on local bus stands, public buildings and other common

Kuldeep, a concerned citizen says, “Wires criss-crossing any view one looks at or public spaces littered up with pasted material, is a fry cry of a city that the British planners had laid out.”