Chandigarh: An advocate-turned-politician, Railway Minister Pawan Kumar Bansal has gradually moved his way up in his political career while maintaining a clean image. However, this will be impacted by a bribery scandal in which his nephew Vijay Singla figures prominently. 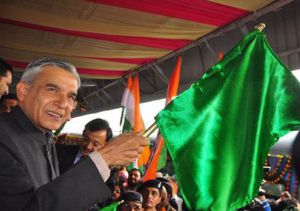 Bansal, 64 (born July 16, 1948), who is into his fourth term as MP from Chandigarh, is generally a soft-spoken man who has maintained a low-profile even as a top politician.

His appointment as railway minister last year was welcomed by Chandigarh residents and within weeks of his taking over, the city got a new Shatabdi Express train connection to New Delhi, in addition to two existing ones, and the Chandigarh railway station started getting a major facelift.

Bansal used to be a frequent traveller on the Chandigarh-New Delhi Shatabdi Express train and continued to do this even after becoming railways minister (not using the special salon meant for railway ministers).

In the past two decades, the ministry was always held by leaders from parties who ran coalition governments with the Congress at the centre.

A law graduate from Panjab University here, also the alma mater of Prime Minister Manmohan Singh, Bansal studied at the same time as the present Leader of Opposition in Lok Sabha, Sushma Swaraj.

Originally hailing from south-west Punjab, Bansal’s first big break in politics came in 1984 when he was made a Rajya Sabha MP from Punjab. He became close to the then Prime Minister Rajiv Gandhi.

Following the last general elections in May 2009, Bansal was elevated as a cabinet minister. He headed various ministries like water resources, parliamentary affairs, science and technology and earth sciences.

Bansal largely kept away from controversies, except for a few run-ins with former Punjab Governor and Chandigarh administrator S.F. Rodrigues. The current bribery scam is the biggest controversy in his political career.

Married to home-maker Madhu Bansal, Bansal has two sons – Amit and Manish. While the elder one runs a school, Delhi Public School, in Chandigarh in which former union minister Ambika Soni also has a stake, the younger son, Manish, was being groomed for politics.