New Delhi: Both houses of parliament were stalled today as the BJP pressed for Prime Minister Manmohan Singh’s resignation over irregularities in the allocation of coal blocks and also demanded that ministers P.K. Bansal and Ashwani Kumar step down.

Both houses were adjourned till 12 noon, minutes after the question hour began in the morning at 11 a.m. when the houses met. 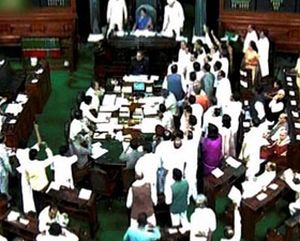 When the Lok Sabha resumed its proceedings at 12 noon, members of the Bharatiya Janata Party advanced to the speaker’s podium demanding the prime minister’s resignation. They also demanded the resignations of Law Minister Ashwani Kumar and Railway Minister Bansal.

Speaker Meira Kumar tried to pacify the BJP members but they refused to budge and persisted with their slogan-shouting. As the ruckus continued, Congress MP Francisco Sardinha, who was in the chair, adjourned the house till 1 p.m.

The upper house of the parliament witnessed similar scenes with BJP members shouting slogans against the prime minister. Amid the chaos, Deputy Chairman P.J. Kurien adjourned the house till 2 p.m.

Both houses have seen repeated disruptions by opposition parties over the allocation of coal blocks and 2G spectrum.

The BJP has said it will not let parliament function till Manmohan Singh resigns over the alleged involvement of his office in the irregularities in the allocation of coal blocks and 2G spectrum and Bansal and Ashwani Kumar quit too.

While Bansal’s nephew was arrested by the Central Bureau of Investigation (CBI) for allegedly taking a bribe for the appointment of a member of the Railway Board, Ashwani Kumar has come under attack in the Supreme Court for vetting the CBI report on coal allocation.