Jammu: A Pakistani prisoner was critically injured when he was attacked by a fellow prisoner in the high security Kot Bhalwal jail here, police said Friday, a day after Indian death row prisoner Sarabjit Singh died after being attacked in Lahore. 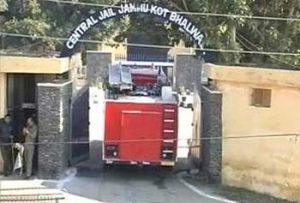 He received serious head injuries and was taken to the Government Medical College Hospital in Jammu, where doctors said he had slipped into a coma, much like Sarabjit Singh who was attacked in a Lahore jail April 26 and died Thursday.

“He has suffered serious head injuries and is in a coma. He has been admitted to Intensive Care Unit (ICU) and we are planning surgery on him as early as possible,” a doctor at the hospital said.

The administration has readied stand-by arrangements to shift Sanaullah for specialised treatment outside Jammu and Kashmir “if required”, an official said

Jail sources said Sanaullah had been in the Kot Bhalwal Jail for the last 17 years. He has been booked in eight cases, including murder, and been given life imprisonment in two.

Vinod Kumar belongs to Uttarakhand and has been in Kot Bhalwal for six years. He is undergoing life imprisonment for murdering his colleague in Leh.

According to sources, both were brought to the jail grounds Friday as was routine. “They were all talking to each other when all of sudden some altercation took place between the two and Vinod Kumar hit Sanaullah on the head.”

Officials are trying ascertain whether Sanaullah was attacked with bricks or a shovel handle.

The state administration has tightened security in all the 14 jails in Jammu and Kashmir where about 80 Pakistani prisoners are lodged.