Gurgaon: They once owned the land where swanky highrises have come up in this corporate hub adjoining the national capital. Injudicious use of the money they earned from developers has now seen many of them working as security guards in those very buildings. 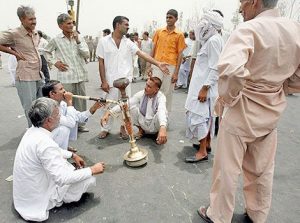 “I got more than Rs.2 crore by selling nearly three acres of agricultural land at Sihi village, now Sector 83-84. I purchased six acres in a village in Mahendergarh district, built up a ‘kothi’ (bungalow) and bought a SUV,” Kanwar Yadav, 48, told.

“I never thought that money would finish one day. I had to sell my SUV after one and a half years. Now I am working as a private security guard in a building on my own land,” he added.

His story is similar to that of many farmers who once owned land on the stretch between Gurgaon and Manesar.

Rajender Singh, Kanwar Yadav, Dharmender, Ramesh, Omprakash, Leela Ram, and Narender Singh, Mahesh Yadav, to name just a few, are from villages like Sikanderpur, Badha, Nawada, Rampura, Nakhrolla, Manesar, Narsinghpur, Mohamadpur and Naurangpur About 90 percent of the farmers from these villages sold their agricultural land to private builders either out of fear or willingness or greed.

Mahesh Yadav, 34, quit his job as a Haryana Police constable a few years ago when he received more than Rs.1.5 crore by selling land.

“He used to celebrate and give parties on the birthdays of his family members. Once he organized a party to celebrate the birthday of his pet. He drove a Mahindra Scorpio for two years. Now, he works as the driver of a private vehicle,” said an elderly resident of Sikanderpur village.

Mahender Singh, 50, received close to Rs.4 crore by selling nearly five acres of land in July 2008. After buying 10 acres of cultivable land in a village near Dharuhera in the adjoining Rewari district, he bought a Mitsubishi Pajero. After 18 months he replaced it with a Tata Safari that he sold in early 2012 and now drives a Maruti Swift.

“My seven-member family survives on the little rent that comes from my plot in Gurgaon city. I had never thought it would come to this,” Mahender Singh rued.

Ramesh, 38, has a similar story. After getting nearly Rs.80 lakh in 2006, he purchased some agriculture land in Rewari district, opened a hardware store and bought a Hyundai Santro car. By 2011, he closed the store, sold the Santro, and now he drives a

three-wheeler of his own.

Omprakash, 40, of Rampura village now works as the assistant of a sub-contractor, building flats on the land in sector 82 that includes five acres that were once his.

“I had an emotional attachment with my land, but I sold it because there was a strong rumour that the government would acquire it,” Omprakash said.

“Many of the semi-illiterate farmers and their families, in the absence of proper guidance and experience, got into the habit of overspending without generating proper sources of regular income,” Anurag Bakshi, a former Indian Revenue service (IRS) officer, told.

“They insisted on buying costly cars and building a bigger house than their neighbours’. There would be competitions in hosting lunches to which hundreds of villages were invited. They spent blindly on their marriage ceremonies,” Bakshi added.

And one day, the money just ran out, leaving them high and dry.