As a law abiding Muslim of India, my head hung deep down in shame as I had read the news of Shafique-ur-Rehman Barq, BSP member parliament, leaving the hall while Vande Mataram, the national song, was being played. On his part, it was the stupidity of highest order. 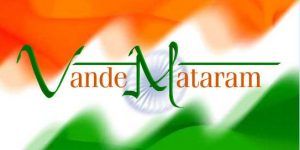 I’m sad that while harping on this communal mindset, he must pay attention to his constituency, mostly comprising Muslims, as there are no proper roads, potable water, electricity, sewage system, good schools and most other basic amenities. However, for filthy vote bank publicity and politics, he would let Indian Muslims down by shunning Vande Mataram, the song that is seen as an ode to the motherland, was penned by Bengali novelist Bankim Chandra Chattopadhyay in the late 19th century.

It’s not the first time as even earlier Muslim leaders have played loathsome politics on this issue and let their community down by reprimanding Muslim children who sing Vande Mataram, a gem of a song, in times when the global Muslim community is under scanner. Unless Muslims come out of the clutches of these ulema and lip-serving politicians, they will keep on suffering.

Muslims must follow the example of Maulana Abul Kalam Azad, who though born in a predominantly Hindu environment, was bold enough to propagate nationalism to Muslims at variance with the prevalent political consciousness based on communalised politics while supporting the same with Islamic sanction. Maulana Azad saw in Vande Mataram the fusion of the endogenic creativity, the Vedantic vision of many parts of truth with the Islamic doctrines of Wahdat-e-Deen (unity of religion) and Sulah-e-Kul (universal peace).

While listening to a rendition of Vande Mataram on January 1, 1952, by a renowned maestro, Krishna Kumar, in Delhi, Maulana Azad admired it saying that it was graceful and inspiring as great luminaries like Rabindranath Tagore, Surendranath Banerjee, Satyabhushan Gupta, R.N. Bose, H. Bose and others had sung it.

It’s high time that the so-called Muslim leaders stopped politicizing the issue of Vande Mataram to promote their mucky politics.

While at Modern School, in Delhi, where I teach, whenever Vande Mataram is sung, my body, mind and soul, all in unison vouched that this is the song of the soul of each Indian irrespective of the religion, caste, colour, status or creed. The melody, the thought content and the ambience of patriotism of Vande Mataram is unmatchable.

As an Indian, I simply fail to comprehend as to why by some of my co-religionists, a religious issue is made out of Vande Mataram that has a universal appeal for all Indians irrespective of caste, creed and faith. As a Muslim, I would like to convey a message to all my countrymen and especially my own community that some politically motivated people are trying to make an emotive issue of Vande Mataram that, in my view, should have been the national anthem in place of Jana, gana, mana…

What is very unfortunate is that anti-Vande Mataram clerics give Hindutva forces the handle to beat Muslims with. Why should we fault Ashok Singhal for giving anti-Muslim statements when our own clerics utter vitriolic things which give an impression that Muslims are less patriotic than the Hindus?

The media is also responsible for creating such an impression by repeatedly giving publicity to speeches by these clerics who are no more than bigots. It is because of the irresponsible statements made by these people that Muslims have to suffer. The voices of secular, patriotic and liberal Muslims never get a forum.

We live in a liberal society where we are encouraged to know about each other’s religion. Does a Hindu become ashudh by going to Jama Masjid or a church? Don’t the Muslim children going to Christian schools sing psalms from the Bible in the morning assembly? Do they come back home losing their faith? Then how can singing Vande Mataram be un-Islamic? Moreover, the words ‘Mother, I bow to thee! Rich with thy hurrying streams, Bright with thy orchard gleams…Mother, to thee I bow…’ found to be objectionable to the clerics have nothing anti-Islam as we are not making sijda (bowing) before anyone except Allah. Where’s the controversy except in the minds of the misguiding fundamentalists?

What is of paramount importance today is that people must beware of the ugly face of fundamentalism commonly constituted by the so-called champions of Islam and advocates of Hindutva who, having lost their say in the aftermath of the Babri Masjid controversy, want to revive that cold and hot war.

So far as Muslims are concerned, true, as per the dictates of Islam, they can never worship or bow in front of anything other than Allah. But that doesn’t take from them the fact that they are loyal to the nation and that they do not need a certificate to prove this.

Muslims should not get carried away by a few lines of the song as nobody is asking them to bow down. They must learn a lesson from Maulana Azad. On the occasion of the inauguration of the Indian Council for Cultural Relations (ICCR), Maulana Sahib’s forehead was smeared with a tilak at which Dawn, a Pakistani daily, commented in a cartoon that he changed his religion to Hinduism. At that, Maulana said that in fact by such participations, his faith in his religion strengthens more. Muslims must learn from his example.

Let me humbly submit that the politically motivated individuals or the ones from clergy should not try to snowball the issue that it might acquire communalist overtones. It’s a charming song Muslims must not find any difference between Sarfaroshi ki tamanna ab hamarey dil mein hai… or Sare jahan se achha Hindostan hamara…and this. The glorious Vande Mataram belongs to Muslims as much as it belongs to any Indian. We are one and just Indians! Don’t divide us into Hindus, Muslims and Christians.

(11-05-2013-Firoz Bakht Ahmed is a commentator on educational, social and religious issues. He can be contacted at [email protected])