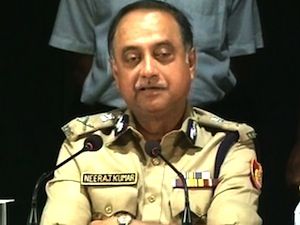 “We had information that Mumbai underworld is indulging in match-fixing or spot-fixing and have contacted a number of bookies and some players,” Neeraj Kumar said, giving details of the arrests of three players and 11 bookies in Mumbai late yesterday night.

“There are overseas connections and there is evidence to prove that the underworld is involved,” he said at the crowded press conference.

“There is no concrete evidence of any members of underworld don, Dawood Ibrahim so far. But, it can’t be ruled out,” he added.

He also said these bookies used to spot the “vulnerable” players who can be contacted easily. But only these three players came in their net.

“In April this year, secret information was received by the Special Cell that some members of the Mumbai underworld are involved in match fixing in the ongoing IPL matches with the active participation of some unidentified conduits, bookies, players – some of who are based in Delhi and national capital region,” the top cop said.

He said the suspects were kept under watch during which it was found that match fixers and bookies from Delhi, Gujarat, Maharashtra, Punjab and some players participating in IPL were conspiring in indulge in spot-fixing.

The Delhi Police team finally arrested Sreesanth and his Rajasthan Royals colleagues Ankeet Chavan and Ajit Chandila for cheating and criminal conspiracy and the 11 bookies.

“The names of these three players came to light… we waited for the situation when all three of them could be pinned down together. We are not ruling out more arrests. They are not players, including international players, but bookies,” Neeraj Kumar added.

“Our team was present in all these matches. Last night our team was camping in Mumbai and soon after the match the decision was taken and the three players were arrested and so were the 11 bookies from different parts of the country,” he said.

Armed with the video clippings of the give-away runs, the police chief also read out transcripts of the conversations between the players and the bookies.

He said they have audio clippings of 100 hours as evidence.