Panaji: A Mumbai-Gurgaon angle has surfaced in the Indian Premier League (IPL) betting scandal after police arrested six bookies in Goa for accepting bets on matches, including the tournament final played in Kolkata Sunday.

According to Deputy Inspector General of Police O.P. Mishra, while all the six arrested bookies hailed from Mumbai, the villa they had rented in a coastal village in Goa belonged to a resident of Haryana’s Gurgaon, located in the National Capital Region. 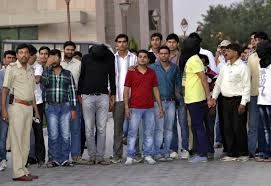 “We will charge the owner of the villa who rented it out to bookies and allowed it to be used for criminal activity,” Mishra told. The owner, he said, has been identified as Sushant Chabra.

Mishra said Mumbai Police would also be kept in the loop in connection with the arrest of the six bookies in Goa.

“Since all of them hail from Mumbai, we will be getting in touch with the Mumbai Police to see if they were arrested before. We will also ask them to question the arrested bookies if need be,” Mishra said.

He added that the sophistication of their operations in Goa could only mean that they have been in the illegal betting industry for a long time.

Mumbai Police have already arrested Gurunath Meiyappan, son-in-law of Board of Cricket Control of India (BCCI) and a key decision-maker in the Chennai Super Kings (CSK) team, which lost the IPL final match to Mumbai Indians Sunday.