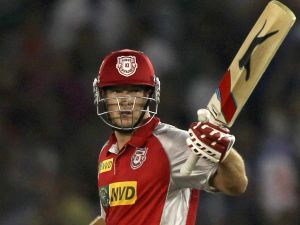 Miller and Rajagopal Satish (18-ball 27) then stole away the match with their 130-run stand for unfinished fifth wicket stand in 49 deliveries as Kings XI scored 194 for four with 12 balls to spare.

Royal Challengers skipper Virat Kohli must be cursing himself for the loss as he dropped a sitter when Miller was batting on 41.

In the next over, there was more frustration for Kohli as Miller smashed Rudra Pratap Singh for two sixes and four fours as 26 runs came off the 15th over and swung the match in favour of the home team, who jumped from 112/4 to 138/4 in just six balls.

There was no stopping Miller, who in the next two overs smashed pacers Ravi Rampaul and Vinay Kumar for two sixes and two fours to take Kings XI to 172 for four after the 17th over.

The match was almost in the grasp of Kings XI as they needed 18 runs off the last three overs.

Hoping for some luck, Kohli introduced Chris Gayle, who this time got a taste of his own medicine and was spanked for 22 runs as Kings XI ran away with an unlikely win.

Gayle’s first three balls went for 15 runs by Satish and Miller got the winning runs and also his century in style by smashing the last ball for a huge six.

Miller struck eight fours and seven sixes during his knock and was also adjudged as Man of the Match.

In the last five overs, Royal Challengers bowlers gave away 99 runs and gifted away the match that was well in their grasp till the 11th over when Kings XI were 79 for four after the top order collapsed.

The only bowler, who got some respect from Miller was left-arm spinner Murali Kartik, who gave away 24 runs for his two wickets from three overs.

Earlier, a 102-run stand between Gayle (61) and Cheteshwar Pujara (51) helped Royal Challengers pile a competitive total of 190 for three from 20 overs.

Kings XI pacer Manpreet Gony got two wickets but was expensive as he conceded 41 runs from his four overs.

The duo started off cautiously slowly as 23 runs came off the first four overs.

The floodgates opened in the fifth over with the introduction of lesser known South African-born Australian pacer Michael Nesser, who has just played six first class matches for Queensland.

Pujara struck the 23-year-old for a four over the covers and Gayle wrapped up the over clobbering him for two sweetly timed sixes as 18 runs came off the fifth over.

Runs came thick and fast and 96 was up in the 11th over. Gayle got to his fifty in 27 balls, hitting six fours and two sixes.

It looked Gayle will go onto score a massive one as he flicked Gony for a six to bring up the century run stand. The burly Jamaican, however, fell in the next ball trying to play accross the line and was castled by Gony.

Kohli (14) started off well hitting Gony for a four in the same over as Bangalore reached 108/1 after 12 overs.

Pujara became Gony’s second victim as he danced down the track to swipe him acros the line, but dragged the length ball onto his stumps.

Awana picked up Kohli in the next over with Marsh taking a good catch over his shoulder while running backwards.

With Bangalore at 144/3, AB de Villiers and Moises Henriques came up with an unbeaten stand of 46 runs in just 19 balls.

De Villiers struck a 19-ball 38 assisted with four fours and two sixes while Henriques two fours and a six during his 7-ball 16. They finished off in style by smashing Nesser for 21 runs of the last over and the Queenslander finished with 62 runs from four overs.