Jammu: Victims of the May 1 earthquake in the mountainous Doda and Kishtwar regions of Jammu and Kashmir allege the government is adopting an “unfair and partisan approach” in disbursing relief to them.

“Even after 18-days of quake hitting the area no relief has reached and the government is adopting partisan approach in giving tents and ration to the affected people,” one of the victims said. 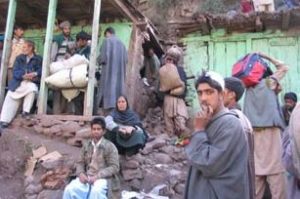 But the administration countered by saying: “It is difficult and mountainous terrain and it takes time to reach the inaccessible areas.”

Mohammad Saleem Ganai of Havelli Mohalla, Bhaderwah said: “We have not got anything in the name of relief. The Congress party leaders are getting tents distributed to their workers while we, the common people are suffering.”

He added that even the loss assessment done by the administration was not fair. “The people close to top leaders are getting the benefit.”

According to Ganai, 70 percent of houses in the area have got damaged, many of them totally. “I can tell you that 100 percent people in our area sleep in open during nights out of fear as aftershocks are still rocking.”

The house of Neeraj Sharma of Manthla was totally damaged in the quake. The family of seven, with two infants, sleep in open as they have not got any tent so far.

“We have not got any tent of ration which was promised by the government after the earthquake,” Neeraj said.

Abdul Hafeez of Bhalesa has similar tale to narrate. “After sleeping in open with three children for over 10 days, I bought a tent of my own from market as government has not provided us anything. The tents and ration is being given to people with political influence.”

Chief Minister Omar Abdullah has directed three ministers, two from his party National Conference and one from coalition partner Congress, to supervise the relief work in the twin earthquake affected districts.

A total of 3,250 tents have been sent to Doda and Kishtwar districts (2,500 in Doda and 750 in Kishtwar) but “only fifty percent have been distributed so far”, a source said.

The officials both in Doda and Kishtwar districts deny the allegation saying: “It takes time to distribute tents and relief in the area which is mostly not connected by road.”

According to official estimates about 55,000 families have been affected by the earthquake.

The area is mountainous and many parts are inaccessible. The government has so far made count of damage to 50,000 buildings including residential, government, religious, educational and others. At least 1,500 buildings are totally damaged, 11,000 severely and remaining partially.

At least 28 aftershocks has created panic among over 500,000 people living in about 10,000 square kilometere area of Doda and Kishtwar districts.

The losses were still being evaluated as majority of the area does not have road connectivity.

“The administration is gradually reaching out to the effected families and is providing tents and ration to them. It is all spread over difficult and mountainous terrain with very less road connectivity,” said Mubarak Singh, deputy commissioner of Doda.

One person was killed and about 100 injured in the earthquake. Majority of the injured are school children as many school buildings were damaged in the shocks of May 1.