Mumbai: Dinesh Karthik earned a recall to the India ODI squad after a gap of three years while the selectors dumped Gautam Gambhir and Yuvraj Singh as they picked a 15-member squad for next month’s Champions Trophy in England and Wales.

Besides Karthik, Shikhar Dhawan, Murali Vijay, Irfan Pathan, Umesh Yadav and Vinay Kumar also made their way into the side.

Apart from Gambhir and Yuvraj, the axe also fell on Ashok Dinda, Shami Ahmed, Cheteshwar Pujara and Ajinkya Rahane, who were a part of the last two ODI series against Pakistan and England. 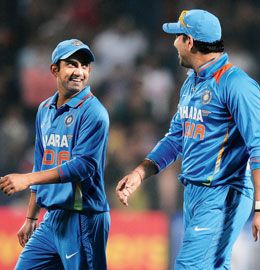 Pujara is injured while Rahane went through a poor form during the last two ODI series.

Comeback men, Dhawan and Vijay will be two openers. Dhawan had made little impact in the five ODIs he had played but was in the limelight with the fastest Test century on debut against Australia in Mohali in February.

Dhawan, Vijay, Virat Kohli, Suresh Raina, Rohit Sharma are specialist batsmen while Karthik will be a back-up keeper for Mahendra Singh Dhoni. But Karthik’s ability to bat at any position and his excellent fielding skills gives him a fair edge.

Karthik, whose last of 52 ODIs was against Sri Lanka in August 2010, has been in great form for the Mumbai Indians in the ongoing Indian Premier League (IPL). He has scored 331 runs, including two half-centuries, from 10 matches with a highest score of 86.

Karthik, who turns 28 next month, however, also had an impressive first class season. Karthik scored 577 runs from eight Ranji Trophy matches at an average of 64 and his highest was 187.

The Sandip Patil-led selection committee also picked 21 probables for the tri-series in the West Indies, which will follow the ICC Champions Trophy. The 15 members of the Champions Trophy squad are also part of the probables.

Gambhir, who is leading Kolkata Knight Riders in IPL, has been included among the probables for the tri-series in the West Indies. The other five probables are Manoj Tiwary, Praveen Kumar, Mohammed Shami, Ambati Rayudu and Rahul Sharma.

The last Champions Trophy will be played in England and Wales from June 6 to 23. The biennial tournament is being would wound up as the ICC is unable to slot it in the crowded cricket calendar.

India will open their campaign with their Group B match against South Africa at Cardiff, June 6. Indian play their second group game against the West Indies at the Oval on June 11 before running into neighbours Pakistan at Edgbaston, June 15.

There are only two day-night games and curiously, Sri Lanka figure in both, to be played at The Oval – against England on June 13 and against Australia on June 17.