Dehra Dun : They call themselves MAD (making a difference), and that is what the people think these crazy youth really are. Rather than doing internships for their profession during their college holidays, they are seen braving the hot summer sun, cleaning the streams of the polythene and other wastes or the slums of the garbage in the hope that civic sense will eventually prevail.

While their other colleagues are interning with peers of the profession or holidaying in the mountain resorts across the country, MAD volunteers, were seen cleaning the Tamsa rivulet that has over the years been virtually turned into a stinking drain, courtesy the garbage that is dumped into it by residents of slums and localities located along its banks. 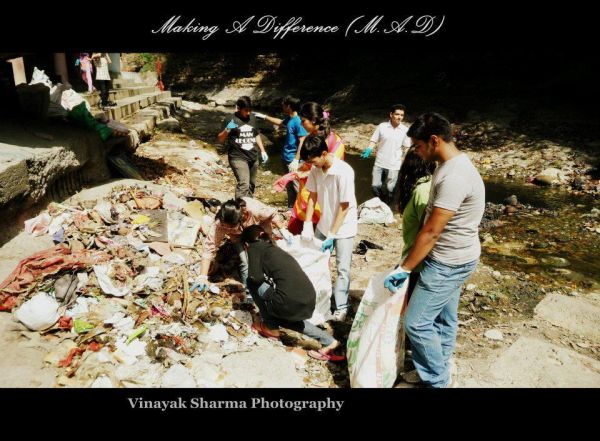 And this is not the first one that they have cleaned; their earlier stints have been on the Tapkeshwar stream, the river at Sahastradhara besides the various localities of this capital city of Uttarakhand. Not that these areas have retained the garbage free look that they had after the MADdians had done their cleaning, but they left mentally and emotionally overjoyed of having done a job well.

Recalls Abhijay Negi, one of the seven founders of the group, it is an ecstatic feeling after having cleaned a place, but the joy is short lived and frustration keeps mounting as a visit to the area some days later show it in the same position as before. “But there have been other places like the Nashville Road and GMS Road, where the garbage pile ups are no longer visible”, he added.

Formed about two years back in the hope that their cleansing efforts would not only clean the city but instill a civic sense in the people, the group which consists of mainly school and college going youngsters in the 15-22 years age group, they admit that their efforts have not shown the desired results at the macro level, though at the micro level changes are visible.

They feel that the biggest achievement during the two years is that the bureaucracy and politicians who had an unconcerned attitude towards them now have a negative attitude. “At least they now have an attitude towards us, even if it is negative, for we can hope and look forward to the day when it will become positive”, said Negi.

On the attitude of the bureaucracy and politicians towards them, despite the fact that they seek no money from the government or other coffers, except that the system just lift and transport the garbage that they collect, they recalled that they had to phone a number of times just for an appointment with the chief minister.

They did not mince words and revealed that the attitude of a politician changed when they said that they had met Rahul Gandhi and he would be contacting them on the matter, whereafter the politician’s P A started calling them up for an appointment. But then the politicians are apparently the last persons for a clean Doon.

They have also been calling up various concerned departments in the hope that some of the rivers of the city that have dried up over the years could be made to flow once again. “If there is talk of water flowing in the mythical Saraswati of Triveni fame, why not the Bindal, Rispana and other rivers that flowed some decades back and are now dry beds”, they asked.

Admitting that it is frustrating, appalling and at times the situation is so desperate that everyone wants to turn back and give up, but then this is what gives them the strength to continue and achieve what they started for. Though there is a register strength of over 800 MADdians, but the active workers who turn up are about 50, and they are enough to Make a Difference.