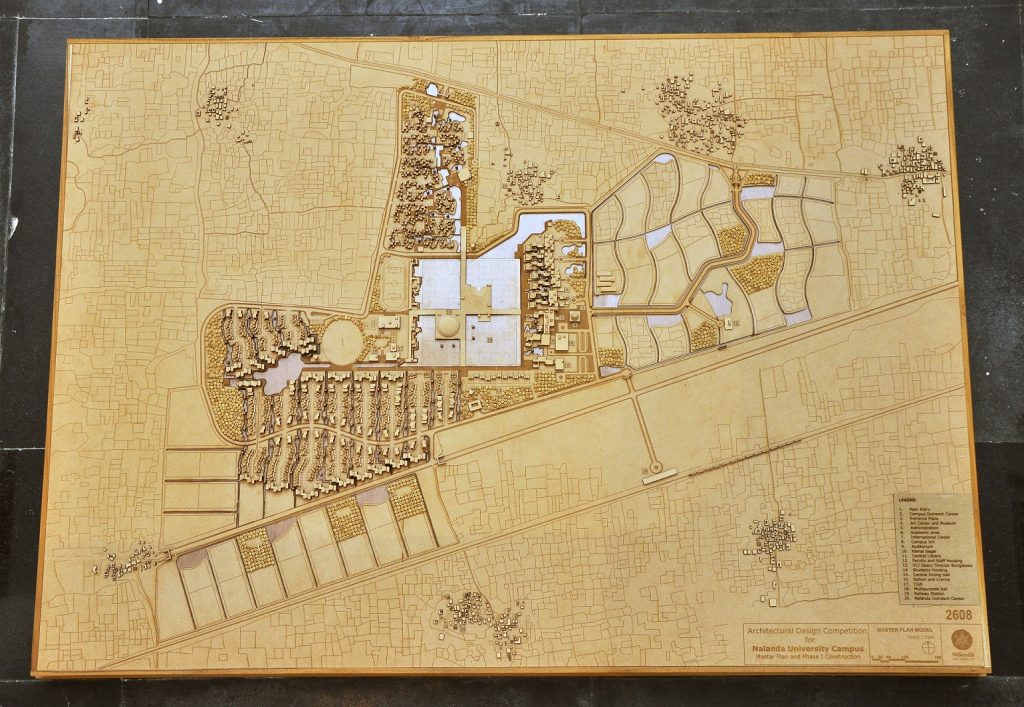 Nalanda (Bihar): Flocked by thousands of scholars and thinkers from far and wide, Nalanda, the ancient seat of learning, was famed the world over as a hub of knowledge. The dream to revive the centre of excellence is taking shape in Rajgir as the Nalanda University.

The Nalanda of the first millennium, founded in the 5th century, boasted of 10,000 students and 2,000 faculty. Its modern reincarnation, set to come up 12 km from the Nalanda ruins, will start its first academic session from 2014 with two schools — postgraduate classes in ecology and environment and historical studies.

There will be 100 students initially.

The modern Nalanda University is an initiative of the Indian government and is supported by the East Asia Summit – a forum of 16 countries of the East Asia region.

The only clue to the proposed university is an eight kilometre wall to mark the boundary of the 446-acre campus. This month, an international jury selected the design of an Ahmedabad-based firm for the university.

The university, when fully ready by 2020, is to have seven schools – all for post-graduate and doctorate students. It is not for undergraduate studies.

According to Vastu Shilpa Consultants’ principal architect B.V. Doshi, whose design emerged winner, the university has been designed in such a way that “it would give a glimpse of what Nalanda stood for – as a centre of knowledge, a centre of understanding life and its processes”.

Though the campus area is an arid space now, the design has proposed a massive lake at the centre, which would house the library — a huge dome-shaped structure at its middle.

The hub of the ancient Nalanda university was its huge library. After it was set on fire by Muslim invaders in the 12th century, the fire is believed to have raged for several days.

The architects plan to harness the rain water that runs down the Rajgir hills and the high water table in the soil to create the lake and other water bodies.

The university plans to be self-sufficient in its water and electricity requirement. The bricks would be specially designed to keep out the summer heat. There will be no air-conditioning, Rajeev Kathpalia, a senior architect of the firm, told.

The university would generate its own energy through photovoltaics and collect the biomass of neighbouring villages to generate electricity.

A project report of the university had estimated the cost to be Rs.1,560 crore ($281 million). In 2010, then Chinese Premier Wen Jiabao presented a $1 million cheque, while Thai Prime Minister Yingluck Shinawatra pledged $100,000 to the varsity.

“The government will ensure there is no shortfall in funds. The project has the backing at the highest quarters,” Jitendra Nath Misra, additional secretary (Nalanda), told.

University Vice Chancellor Gopa Sabharwal told that it was now in the process of drawing up a contract with the architectural firm to get detailed drawings so that the construction work could begin.

“Nalanda is to be a research intensive university,” varsity dean Anjana Sharma said.

When it is fully up and running, the university would host 2,450 students with a student-teacher ratio of 5:1, Sudhir Kumar, a Nalanda University official, told.

It would be fully residential, like its ancient namesake, and offer courses in science, philosophy and spiritualism along with social sciences.

The project took shape in 2006 at the initiative of then president A.P.J. Abdul Kalam. He opted out in 2011.