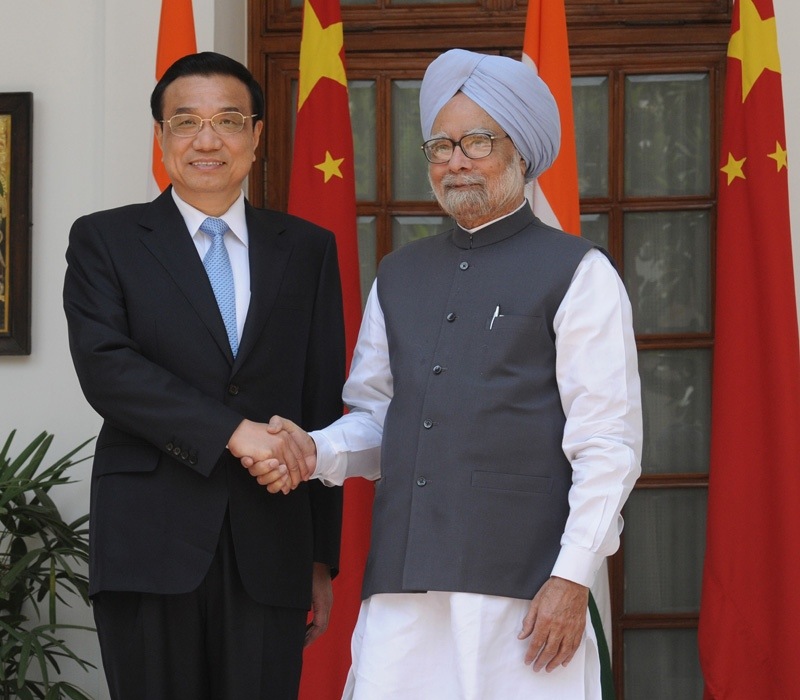 New Delhi: India and China scripted a new chapter in their ties Monday as Premier Li Keqiang and Prime Minister Manmohan Singh candidly discussed their recent border row and decided to take steps for an early resolution of a dispute that triggered a war in 1962.

Li, making New Delhi his first halt in his foreign trip after assuming office in March, and Manmohan Singh also agreed that the world’s two most populous nations and biggest economies have a lot in common despite some known differences.

India’s ambassador to China S. Jaishankar, meanwhile, admitted that the Sino-Indian boundary dispute was complicated and needed a detailed examination. “The issue was discussed at length,” he said, but did not give details.

Both sides inked eight agreements, including on conducting the Kailash Mansarovar Yatra with China to provide better facilities for pilgrims, and four agreements to boost Indian shipments of buffalo meat, fisheries and pharmaceuticals to China, and help reduce the trade deficit.

A joint statement issued after their meeting stressed on maintaining peace and tranquility along the border and on boosting trade ties.

Li arrived here Sunday evening and held two rounds of talks with Manmohan Singh — first over a private dinner Sunday and formally Monday. It was Manmohan Singh’s first meeting with the Chinese premier. He had held talks with President Xi Jinping at the BRICS summit in Durban, South Africa, in March.

Chinese troops intruded 19 km across the Line of Actual Control – de-facto Indian border – April 15 and pitched tents, raising tensions between the two countries. The row ended May 5 after many rounds of negotiations, with both sides reverting to their previous military positions.

As expected, the episode came up at the Li-Manmohan Singh talks.

Manmohan Singh told the media along with Li on Monday that they held “wide ranging and candid discussions” on all matters of mutual concern and realised that there was “a great deal of meeting of minds”.

Li echoed him, saying India and China were “strategic partners and good friends” that could speak to each other with candour, while stressing on discussions on the border issue and river waters.

“We agreed that our special representatives will meet soon to continue discussions, seeking early agreement on a framework for a fair, reasonable and mutually acceptable boundary settlement.”

Manmohan Singh said both leaders “took stock of lessons learnt from the recent incident in the western sector” of the Sino-Indian border, and that the “existing (border) mechanisms proved their worth”.

India and China fought a border war in 1962. But over the past quarter century, both countries have steadily built up their relations despite the unsettled frontier dispute.

Li said China and India had worked to “maintain tranquillity and peace in the border areas” and added that “we need to improve border mechanisms… make them more efficient” as well as “resolve our differences”.

Manmohan Singh also raised India’s trade deficit with China and Indian concerns over Beijing’s decision to build dams over the Brahmaputra river in Tibet that flows into Arunachal Pradesh and Assam.

“We have had multiple, friendly, in depth and candid discussions. The most important outcome of these discussions is that the leaders of the two countries have reached strategic consensus and deepened strategic trust,” said Li.

“Since we are strategic partners and we are good friends that can speak to each other with candour, so we do not deny that there are some problems between the two sides,” the visiting premier said.

Manmohan Singh said he hoped to visit China at the earliest.

Li, who is heading a large delegation, now goes to Mumbai, India’s financial and entertainment capital, from where he will fly to Pakistan, Switzerland and Germany.