Shimla: Probe into the sensitive phone tapping case is up against a legal wall for the investigators hold that contents of the unauthorized snooping was not legally admissible evidence. Only accountability of the illegal action of tapping phones without due authorization needed to be fixed, investigators revealed.

Highly placed sources disclosed that many people were apprehensive about the content of the recorded conversations finding its way into the public domain for much of the content recorded was of a private nature involving no criminality. 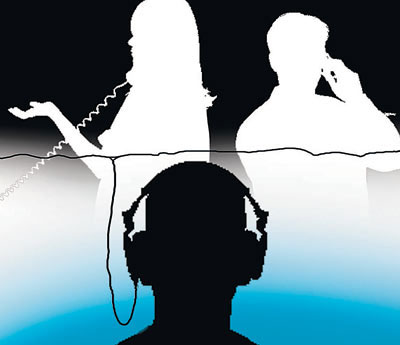 Being a highly sensitive issue, a member of the investigation team on conditions of anonymity disclosed, “We are not interested in recorded private conversations. Moreover, any unauthorized phone tapping done is inadmissible as evidence in law. What do investigators do with such material,” he questioned?

Hard disks of computers on which thousands of recorded phone conversations, some legally and most illegally, were stored were handed over to vigilance department, the primary agency investigating the case, about ten days ago.

AP Singh, DIG vigilance, when contacted said, “It is complicated investigation and will take time as many questions of law are involved.”

With the chief secretaries office, after much delay, having handed over the seized hard disks to the probing agency, Singh said, “The data was being analyzed.”

With contents of the recorded material only providing intelligence inputs that cannot be admissible as evidence before the courts, the investigators have focused their probe into ‘Gestapo’ working of the police forces that indulged in the criminality of intruding into the private lives of individuals.

With phone numbers of contractors, politicians, bureaucrats, journalists and several other private persons said to be figuring on the list of over 1100 tapped phones, the government citing the Indian Telegraph Act, in the Vidhan Sabha, refused to disclose names of the persons who were victims of the illegal police action.

A senior bureaucrat, who claimed that his phone was regularly tapped and figured on the phone list, on conditions of anonymity said, “there is a vested interest between the ruling party and the opposition, as well as other phone tapping victims that the recorded conversations be destroyed in accordance with law.”

At the same time he pointed out, “after all, nobody is interested in an investigation that could expose dubious personal lives of many big and powerful people.”

A day before chief minister Virbhadra Singh took oath on 25th December, chief secretary Sudripta Roy, acting on a complaint, had seized computers of CID department at night time when efforts were being made to destroy evidence of phones tapped illegally.