Mumbai: Although Kangna Ranaut is thankful to her mother Asha for teaching her basic life lessons, she also confesses to be scared of her strict mom.

Talking about her childhood memories, the actress said she doesn’t remember her mom’s lullabies, but her strictness. 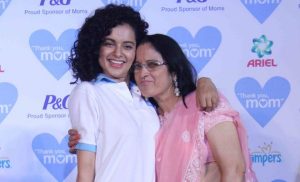 Sharing a childhood moment, Kangna said: “I was beaten up with a broom in my childhood. There is nothing memorable than that. All mothers sing lullaby for their children and feed them with good food.”

“My mother was a Sanskrit teacher and all the students in the school were scared of her,” added the actress, who was recently seen opposite John Abraham in Sanjay Gupta’s “Shootout At Wadala”.

But at the same time, Kangna says her mom trained her so well that if she has to quit acting, she has an alternative.

“My mother had trained me in everything, except for acting. I know how to wash dishes and cook food. I was told that you will let down the family after marriage,” she told reporters at Thank You Mom event organised by P&amp;G on the occasion of Mother’s Day falling coming Sunday.

“So just in case it doesn’t work out here, I am set,” she added.

The 26-year-old National Award winning actress, who made her Bollywood debut in 2006 with “Gangster – A Love Story”, hails from a Rajput family in Himachal Pradesh.

Kangna will soon be seen in “I Love New Year” opposite Sunny Deol.

Actress Shraddha Kapoor and filmmaker Abhishek Kapoor were also present at the event along with their mothers.