Bhikhiwind (Punjab): Hundreds of people flocked to this dusty Punjab town since early Friday to catch a last glimpse of Sarabjit Singh, the Indian prisoner who was killed in a brutal attack in a prison in Lahore, Pakistan. 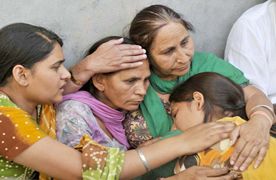 The Punjab government has announced a three-day state mourning for Sarabjit. He will be cremated with full state honours here around 2 p.m. Friday. A number of top politicians and others are expected to attend the cremation, and arrangements were made for the expected presence of thousands at the cremation ground here.

The body, placed in a wooden coffin and draped in the tri-colour, was brought for its final journey to his native town past midnight. His family and friends wailed as the body was brought back to his house, marking the end of his journey of torture and despair, that lasted nearly 23 years.

As the Indian Air Force helicopter equipped with night-landing facility landed at the special helipad, Sarabjit’s sister, Dalbir Kaur, earlier a picture of strength, and the champion of her brother’s freedom and return from Pakistan, appeared completely shattered. She touched the coffin as it was brought out from the helicopter.

Sarabjit’s body was flown in a special Air India flight from Lahore to Amritsar international airport around 7.40 p.m. Thursday; from Amritsar, it was transported to Bhikhiwind by chopper.

Late Thursday night, doctors from Amritsar Medical College conducted a post-mortem examination on the body as per the wishes of Sarabjit’s family.

The post-mortem was conducted at the government hospital in the sub-division town of Patti, 40 km from Amritsar.

“We have conducted the post-mortem examination. There were injury marks on his head and other parts of the body,” Gurmeetjeet Singh, a doctor, told reporters.

This was the second post-mortem on Sarabjit’s body; the first one was conducted Thursday morning by a medical board in Lahore.

Shops and others establishments, including educational institutions in this town, will remain closed Friday also. These had remained shut Thursday.

Punjab Chief Minister Parkash Singh Badal announced a financial grant of Rs.one crore for Sarabjit’s family. He said that Punjab would give government jobs to both his daughters.

The 49-year-old Sarabjit received fatal injuries in Lahore’s Kot Lakhpat Jail April 26, when he was brutally assaulted by fellow prisoners with bricks and sharp-edged things.

He had been arrested in Pakistan after crossing the international border in an inebriated state August 1990.

He was charged with being an Indian spy who had carried out bomb blasts in Lahore and Multan in 1990, which left 14 people dead and many others injured, and awarded death penalty by Pakistani courts, but his hanging was stayed indefinitely in April 2009.

Pakistani security agencies claimed he was Manjit Singh, the man responsible for the blasts.

His family, however, maintained that his was a case of mistaken identity, and Sarabjit had nothing to do with the blasts in Pakistan.