New Delhi: They sit quietly, keeping a careful watch on passengers as the bus travels through the city in the dead of the night, ready to intervene if anything goes wrong. The uniformed men are Delhi government’s home guards posted on night buses to ensure the safety of commuters, especially women. 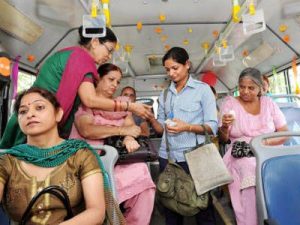 Around 120 home guards have been specially roped in to provide security on night buses run by 21 bus depots. The Delhi government took the decision to post home guards after the brutal Dec 16, 2012 gang-rape of a young woman in a moving bus in south Delhi.

“I do around two rounds every night in a bus. My duty is to keep a watch on passengers. Whenever I spot any suspicious person, I inform the bus driver or the local police,” a 26-year-old home guard, who did not wish to be named, told.

He is deployed at the Rajghat depot.

According to officials, the home guards are mostly selected through an entrance exam and then have to face an interview. The minimum qualification is Class X pass.

Those selected for the job then undergo 35 days defence and martial arts training. The home guards, who are not provided arms, are paid Rs.300 per night.

There are 46 bus depots across Delhi, of which 21 operate night services.

Another home guard on condition of anonymity said their job was to lie low and only identify themselves once they sense trouble.

“The driver and ticket checker are busy and on occasions don’t get to know what is happening. We have to take charge if someone misbehaves with a women passenger or if someone is trying to pick pockets,” the home guard told.

“In night buses, lot of rogues or drunkards travel. We have to keep an eye on these things,” he said.

Although, woman don’t travel at night in these buses, a few venture out in the early morning hours for work.

Officials said Delhi’s Rajghat bus depot in central Delhi has the maximum number of home guards, 22, who travel on buses, while the Hasan Pur depot in east Delhi has the second highest number of 10 volunteers.

“Rajghat depot has the maximum night bus services. Around 50 buses head for the airport. So the requirement of home guards is the maximum there,” DTC spokesperson Anand Kumar told.

“It is a precautionary measure. Although no such incidents have been reported in a DTC bus, especially at night, the presence of a home guard would help avert such incidents,” Anand Kumar added.

According to another official, some minor cases of misbehavior with women commuters have been reported but no formal complaint was lodged with the police.

“Since the service was introduced, no complaints have been reported so far by any woman commuter. The home guard volunteers are performing their duty well,” Delhi Transport Minister Ramakant Goswami told.

Surprise checks are conducted to see if the home guards are alert. A home guard who was found sleeping was dismissed from service on the complaint of a woman passenger, said an official.

The driver of the bus was also placed under suspension, he added.