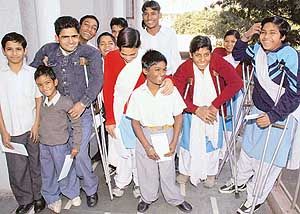 “The government has notified four senior secondary schools as inclusive where disabled students will study along with other children. Eight more schools are to be made inclusive schools soon,” foundation chairman Ajai Srivastava said in a statement.

Umang Foundation yesterday organised a film festival on disability with the support of internationally renowned ‘We Care Film Fest’ in the Government Girls Senior Secondary School in Portmore in Shimla, which has been notified as inclusive institution.

Srivastava said 20 girls with visual and hearing disabilities are studying in the Portmore school.

Interestingly, it was the same school which had denied admission to the disabled girls in 2011. Later, on the intervention of the Himachal Pradesh High Court, the school gave admission to three blind girls and waived off their entire fee.

Roy was the chief guest at the film fest and the principal secretary of social justice and empowerment, P.C. Dhiman, presided over the programme.

As many as 19 award winning short films on disability were screened. More than 2,000 children watched the films.

Srivastava said the film fest was an effort to change the traditional perception about disability.