Shimla : Reputed Grewal Eye Institute (GEI) has cautioned about vision problems among children going undetected, the costs that society has to be bear for such oversight and has offered to collaborate with government agencies under ‘mission vision’ for early detection and timely treatment. 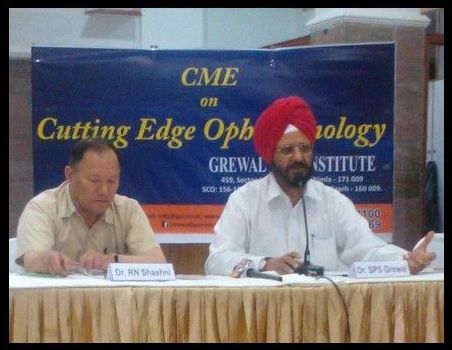 Talking to reporters, Dr SPS Grewal CEO of the Chandigarh based institute said that GEI was willing to join hands with schools and the government for proper eye care of small children.

Left to themselves, most young children are unable to detect vision defects on their own, he said, Should the problem go undetected, the afflicted student suffers in the learning process that affects the child’s future, he added.

To highlight the problem, Dr Shashni, a member of the institute that runs a center in the city also said, “after a routine vision check up of 550 students of a reputed school here recently, it was found that about 150 students had refractive problems of whom about 50 students have started wearing eye glasses.”

“There needed to be a mass movement for ensuring that all students should have an eye check up at least once in two years,” said Grewal.

He said that it was noticed that people in Himachal Pradesh were more vulnerable to eye diseases that those in Haryana and Punjab.

“Those living on high altitudes are more likely to have Glaucoma, allergies and pterygium due to high UV light,” he said.

It was daunting task for patients to travel from interior areas to the main city for treatments and follow ups, which necessitated taking essential preventive eye care measure for Glaucoma, diabetes, age related diseases, lazy eyes, glasses for refractive error and others, he added.

Rising number of diabetics in the country was going to see the number of eye patients rise dramatically. Talking about availability of better procedures, he said that they improved vision for even severe diabetics. Earlier it would involve a laser surgery that would kill tissue but now it is avoided and an advanced injection is used.