Under unrelenting attack on more than one count, one would expect Prime Minister Manmohan Singh to be wilting. No way! On the night he released his government’s report card, nine years after he came to head the world’s largest democracy, Manmohan Singh was visibly cool. 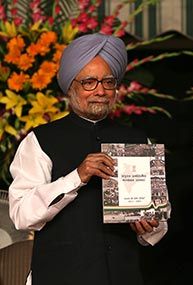 Nothing in his body language betrayed the slightest indication that the 80-year-old economist-turned-politician may be feeling the heat of pressure cooker politics, with a bitter Lok Sabha battle barely a year away. Of course, Manmohan Singh is a poor communicator, and that came out in the way he read out his speech to mark nine years of UPA.

But once off the stage, he was full of life — smiling, shaking every hand extended to him, greeting people warmly, occasionally recognising a journalist, and answering queries like a seasoned – not a reluctant – leader as peacocks in his garden kept up a steady din.

In reality he should have been worried. The dais erected for the event revealed the poor state of affairs in what was once a formidable coalition called the United Progressive Alliance.

On Wednesday night, it was a poor shadow of its former self. Besides leading lights of his own Congress, including party president Sonia Gandhi, P. Chidambaram, A.K. Antony and Rahul Gandhi, the only notable others on the stage from among the allies were a still discredited Lalu Prasad and his chum Ram Vilas Paswan as well as Farooq Abdullah, Sharad Pawar and Assam’s Badruddin Ajmal. This poor line-up is unlikely to take the Congress to the winning post in 2014.

This is a far cry from the time when Sonia Gandhi had sewed up an impressive alliance to successfully take on the BJP and Atal Bihari Vajpayee. The experiment was repeated five years later, with far greater success. Today, with the Congress widely seen as a sinking ship, notwithstanding the BJP’s own hiccups, smaller parties are unlikely to come flocking to the UPA. The Congress has already lost the JMM, TRS, DMK and Trinamool Congress. The BSP and Samajwadi Party are reluctant friends. The prime minister is not naive to not know this.

So what gives Manmohan Singh the confidence?

One logical reason could be the neat division of work between him and Congress president Sonia Gandhi, who takes away the burden of managing the country’s oldest political party and its unceasing conflicts with partners small and big while letting him govern a complex India. In some ways, this arrangement based on mutual trust – notwithstanding the rumour mills – is rare in politics. It helps the prime minister to focus on governance.

But all is not well within the Congress. Not everyone in the grand old party is on the same wavelength as Sonia Gandhi vis-a-vis Manmohan Singh. Members of his own ministry – although a minority – are critical of him, telling friendly journalists that they tolerate him only because of Sonia Gandhi. They complain that he has failed to deliver corruption-free governance despite being freed of party work and coalition politics.

For the nth time Wednesday, Sonia Gandhi spoke effusively about Manmohan Singh. But while the prime minister admitted to problems, including perceptions related to corruption, Sonia Gandhi sounded aggressive while defending the UPA. She spoke bravely. But brave words alone cannot help a party or a coalition to win an election. And 2014 is not far away.