Dehra Dun : NCC teams climbs Mt Everest; Sanawar boys on the peak; twin sisters make it to the top; first Indian amputee on Mt Everest; Pakistani brother and sister make it to the peak; SSB jawans scale Mt Everest, are headlines that one saw in the newspapers over the past week, making one wonder if there is some local peak next door or the world’s highest mountain. 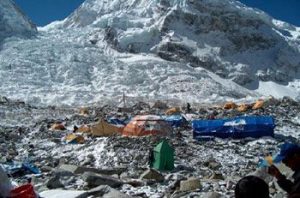 Not to undermine the efforts and courage of the numerous people, including teenagers, amputees and girls who have made it to the highest peak on the worlds despite all the odds and have shown the mental strength to undertake one of the most arduous climbs, but environmentalists warn that if nothing is done to curtail the number of climbers, the mountain will become a garbage dump.

Experts are of the view that climbing atop Mt Everest and standing on the highest peak of the world is perhaps the biggest ambition of mountaineers the world over. However, they hasten to add that the ambition is nursed by new comers to the field of mountaineering and not seasoned mountaineers.

They pointed out that earlier just seasoned mountaineers dared to take upon Mt Everest as it was considered a challenge for the toughest, but today if one has the money or can arrange for the funds, the necessary arrangements can be made for taking upon the highest peak of the world. This is perhaps why at any one given point of tome during the season there are over a hundred mountaineers taking upon the peak, as was witnessed the last and this week.

Interestingly they mentioned that ever since Tenzing Norgay and Edmund Hillary scaled the peak in 1953, more than 4000 mountaineers from the world over can boast of having repeated the feat and some of them of having climbed the mountain more than once. One of them is Lavraj Dharmshetu of Uttarakhand who has called the peak five times, including once without oxygen in March 2012.

And as far as Uttarkhand is concerned the state can take the credit of putting seven people atop Mt Everest in the last four days.

Though seasoned mountaineers say that making an attempt on the highest peak is not only mental and physical toughness, but also financial burden on the climbers, they were in accordance with the environmentalists that there is need for certain restraints on allowing the number of persons attempting to make it to the top.