A shallow earthquake measuring 5.8 on the Richter scale struck parts of North India at about 12:27.12 p.m. today. The epicenter was Lat. 33.10 N Long. 75.80 E in Jammu and Kashmir, the Indian Meteorological Department declared.

Early reports reveal one causality and more than 25 people injured in two different locations in Jammu and Kashmir. There are no reports of any damage or casualties from elsewhere, though tremors were felt across the border in some parts of Pakistan too. 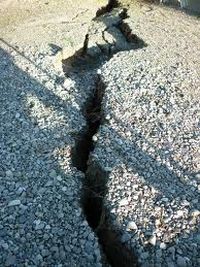 It’s for the third time unsettling tremors have been felt in north India since a destructive earthquake measuring 7.5 on Richter scale hit the Iran-Pakistan border on April 16 and the second measuring 5.6 with epicenter in eastern Afghanistan on April 24.

For a long time scientists have been denying risks of a potential earthquake in the region, saying the current episodes are not geologically connected with the India’s seismic anatomy.

How far can we stretch our safety?

There are notable tectonic shifts happening in the Himalayan region, and they cannot and should not be ignored. We have seen it for ourselves with the trio of quakes that have jolted the region over the fortnight.

Seismologists may downplay the risks of a potential earthquake, but they don’t deny it outrightly. According to various scientific calculations it’s proven that sufficient energy has been accumulated within the earth’s crust in the Himalayan region to trigger an 8 plus magnitude earthquake.

An earthquake cannot be predicted (at least science and technology doesn’t have a way yet) so, no one is sure when an earthquake of such an intensity may strike – but it is bound to happen in the near future, if these tremors in the past few days are anything to go by.

Seismologists have trustworthy data of rate of compression in the Himalayas, but due to lack of significant data on the cycles of earthquakes, they cannot accurately predict anything regarding an earthquake worthy of a massive destruction.

Why is it not possible to predict an earthquake?

Experts around the globe are of the opinion that earthquakes cannot be predicted. Any forecasts ever made have only proven wrong. This prompts up a question: Given the scientific and technological advancement, why haven’t the scientists been able to predict earthquakes?

Once the earthquake strikes there is little you can do to protect the house or belongings, but there are ways to protect yourself: