Shimla: Mild rainfall in some parts of Himachal Pradesh, including this state capital, brought relief from the scorching heat today.

Weather officials said the rains would bring down temperatures across the state by three to four notches. 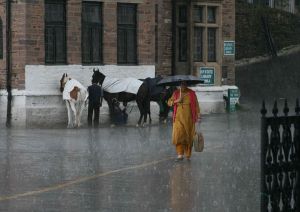 “Most parts in the state saw mild spells of rain, bringing the temperatures down considerably,” an official of the meteorological office here told.

Una town on the Punjab border was the hottest at 43.5 degrees Celsius.

Dharamsala in Kangra district recorded a high of 35.2 degrees Celsius, four notches above average, while it was 39.8 degrees in Sundernagar in Mandi district, 26 degrees in Kalpa in Kinnaur district and 37.7 degrees in Nahan town.

The Met department predicted rain and thundershowers at some isolated places in the state in the next 24 hours.