New Delhi: In a move to plug distribution leakages the government will start direct transfer of cash subsidy on cooking gas (LPG) in 20 districts from June 1. 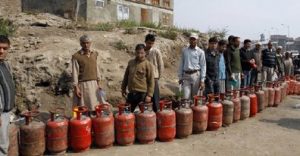 Launching the scheme here today Petroleum Minister M. Veerappa Moily said 7.6 million consumers in 20 districts like Mysore, North Goa, Pondicherry, Mandi and Hyderabad, will get Rs.435 in their back accounts each time they book an LPG refill.

The consumers then will have to buy cooking gas at the market price which is twice the subsidised price in Delhi of Rs. 410.50 for a 14.2 kg cylinder.

“We are ready to launch the direct benefit transfer (DBT) scheme for LPG all over the country but we want to see the results of the roll-out in these 20 districts,” he said.

While 89 percent LPG consumers have UID numbers, the government will give a three-month grace period to those still without Aadhar numbers in these districts to get the UID number and seed it with their bank accounts, where the cash subsidy has to be transferred.

From September 1, only consumers having Aadhaar linked bank accounts will get cash subsidy, while the rest will have to buy LPG at market price, Moily said.

The government anticipates a saving of Rs. 8,000 to Rs.10,000 crore per year in LPG after the scheme is rolled out all over the country.

The government had in January launched the DBT scheme whereby government benefits like pensions and scholarships are directly transferred to beneficiaries.

Currently, consumers are entitled to nine 14.2 kg cylinders of LPG at subsidised rates in a year.

The 20 districts where the DBT for cooking gas is being launched include Anantpur, Chittoor, East Godavari and Hyderabad in Andhra Pradesh, Bilaspur, Hamirpur, Mandi and Una in Himachal Pradesh, Mysore and Tumkur in Karnataka, Pathanamthitta and Wayand in Kerala, Wardha in Maharasthra, Pondicherry, and SBS Nagar/Nawanshahar in Punjab.