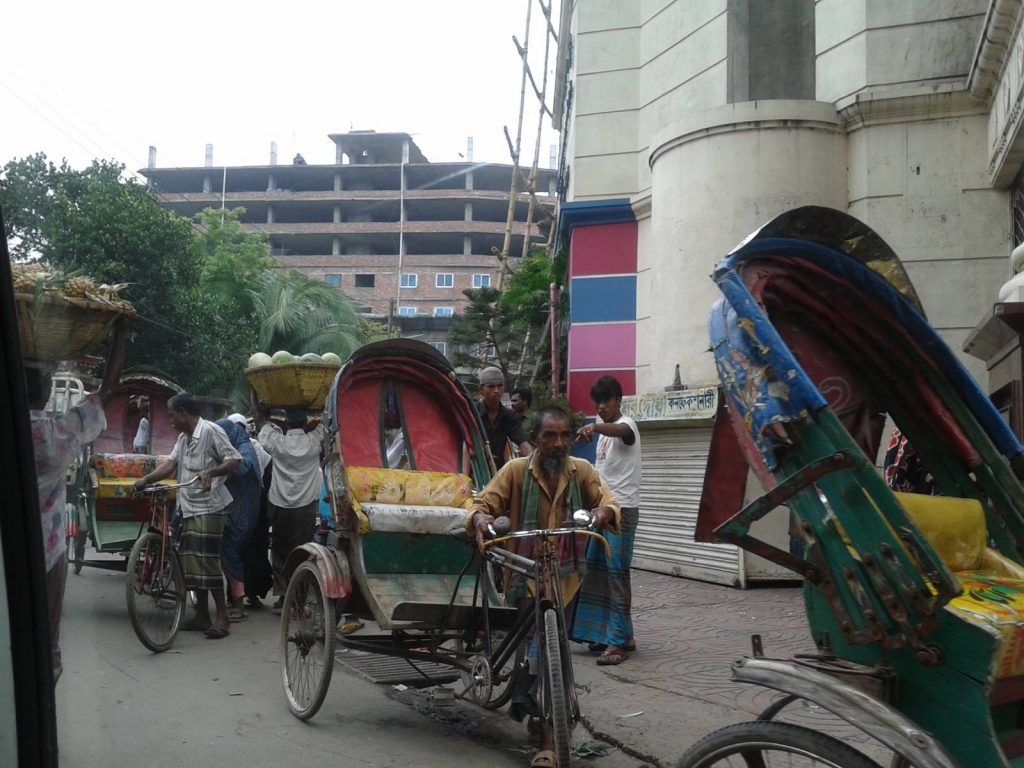 Dhaka, May 21 (IANS) With a hoot and a honk, meandering through Dhaka’s famed traffic snarls, the legion of psychedelic rickshaws that are an essential part of Bangladesh’s capital have a new claim to fame – they ferried protestors for free from parts of the city to the site of the revolutionary Shahbag movement during its peak in February and March.

Thousands of protesters, mostly youths, had been staging protests in the Shahbag area from Feb 5 demanding capital punishment for Jamaat-e-Islami leader Abdul Quader Mollah and all others charged by the International Crimes Tribunal with committing genocide, war crimes and crimes against humanity during the 1971 Liberation War.

“It was our contribution to the movement…we brought people from areas in Dhaka to Shahbag for free. The protests were for justice and we stood by it,” Mohamad Mir Alam, a rickshaw-puller of Dhaka, told IANS.

It all began Feb 4 when Mollah flashed a victory sign after being sentenced to life imprisonment.

Terming the punishment “mild”, people from all walks of life, including youth, children, musicians, artists and writers, joined in the movement demanding death penalty for Mollah as well as other alleged war criminals.

The Shahbag area – the epicentre of the protests – has been now christened “Projonmo Chottor” (Generation Circle). A majority of the rickshaw pullers drove students from the Dhaka University campus to Projonmo Chottor.

“Most of the participants were students…and since the university is close…we brought them here during the gatherings that followed. I made four trips to Shahbag on one of the days,” said Alam.

In stark contrast, some made a conscious decision to avoid the area.

“The whole area was blocked with people. If I had gone there i would have been stuck. So I didn’t go near that crossing,” Tareeq, a puller in the posh Gulshan-1 area of Dhaka told IANS.

On any ordinary day, these rickshaws give tough competition to the mushrooming snazzy fleet of imported vehicles, their size notwithstanding.

Despite the ever-increasing array of shiny cars, the rickshaws have held sway over the Hondas and Toyotas.

“The population keeps increasing, the cars keep increasing, but it hasn’t affected us. In fact, the number of rickshaws have also gone up proportionately,” Abdul, a rickshaw puller in Gulshan-1, told IANS.

Introduced in Dacca, as Dhaka was then called, in the 1930s to a population of around 60,000 people, these steely contraptions powered by muscular labour now serve a teeming metropolis of 15 million.

Crisscrossing through the swirling wave of humanity that is Dhaka, the brightly painted cycle rickshaws ferry the masses and the classes – one reason for their dominance. Commuters with laptops in hand can be seen sitting astride the mini chariots.

“We ferry passengers from all walks of life. People with good financial background as well as the lower middle class choose us,” Abdul explained, adding that the rickshaws are banned from plying on the main roads.

Motorised rickshaws were introduced in the capital a few years back but were recently discontinued.

“They used to run with a switch and had a motor beneath. But because the private car owners had issues with them, they were discontinued in Dhaka. They however still ply in the rural areas,” Abdul pointed out.

Despite being accused of crippling city traffic, commuters feel it is the “best option.”

“It is the best option for us as we need to cut through the traffic swiftly and they can move in the narrow lanes and alleys very well. It is fast and affordable,” said hotel employee Anwar.

Wazir Ahmed, another puller, said the rickshaws were popular because they were pollution-free.

“It is a pollution-free way of travelling and far better than other petrol or diesel-run cars,” Ahmed said.

(Sahana Ghosh can be contacted at [email protected])