Chief Metropolitan Magistrate Lokesh Kumar Sharma said: “The defence counsel has cited reason of social stigma to the families of the bride and groom. Social sentiments cannot be considered as a valid ground while evaluating the grounds of bail.” 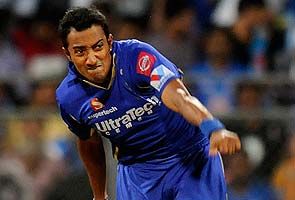 “Keeping in view the gravity of offence and conspiracy with other co-accused persons, I do not find any ground to admit accused either on regular or on interim bail. Both the applications are accordingly dismissed,” the court said and advised Chavan’s counsel to postpone the marriage.

Along with Sreesanth and Chandila, the court also sent two bookies Ashwini Aggarwal and Chandresh Patel to judicial custody till June 4. The bail plea of Sreesant would come up for hearing on June 4.

Meanwhile, bookie Ashwini Aggarwal and Chandresh Patel also moved their bail pleas, which have been fixed for hearing June 4.

The court dismissed the plea of Special Cell of Delhi Police seeking two more days’ custody of Sreesanth saying they want to confront him with Abhishek Shukla, who joined the investigation in the morning and allegedly removed the electronic gadgets of the cricketer from his room after his arrest in Mumbai.

The court turned down the plea of Delhi Police for extension of Sreesanth’s custody saying “he cannot be held liable for the things that took place at his back”.

The court said that public prosecutor submitted that there is possibility that certain electronic gadgets might have been removed by Shukla from Sreesanth’s hotel room in Mumbai, while he was in police custody.

“However, there is nothing on record to show such thing… Public prosecutor’s arguments appears to be based upon assumptions,” the court said denying police custody of Sreesanth to police.

It further told the court that the bills of the parties thrown by Sreesanth were paid by Abhishek Shukla as his (Shukla’s) PAN card number was mentioned on the bills.

Senior advocate Rebecca John, appearing for Sreesanth, opposed the extension of police custody of Sreesant saying the the police theory that some articles were removed from Sreesanth’s hotel room was untenable as the room was unattended for three days and it was Mumbai Police which had later recovered a laptop from his room.

Sreesanth, Chavan and Chandila, who played for Rajasthan Royals team in the IPL, were arrested in Mumbai by Delhi Police for their alleged involvement in spot fixing in matches for payments up to Rs.60 lakh for giving away pre-determined number of runs in an over.