‘If terrorism is uncontrolled, if leftwing extremism continues to flourish in important parts of our country which have tremendous natural resources of minerals, that will certainly affect the climate for investment.’ 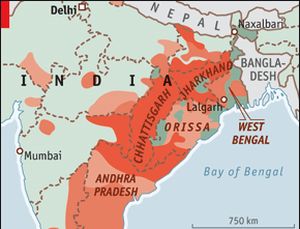 This is Prime Minister Manmohan Singh on June 9, 2009. His position has remained unchanged. Finance Minister P. Chidambaram is yards ahead of him. The Congress and the BJP have the same economic policies, he says. It follows therefore that the Congress join hands with Raman Singh, the BJP chief minister in Chhattisgarh, and hammer the Maoists. But on the eve of the assembly elections, the Congress sought to make tactical adjustments to the strategic vision and got hammered in Bastar.

This is the backdrop to the drama being played out between the Maoists and the government across the tribal belt spanning eight states.

Manmohan Singh’s statement cuts to the heart of the matter. The state must have access to mineral wealth for the economy to zoom to 10 percent. The gunfight in Sukma is the latest battle in the long drawn war.

‘On May 25, a detachment of the People’s Liberation Guerrilla Army conducted a massive attack on the 20 plus vehicle convoy of the Congress which resulted in wiping out at least 27 Congress leaders, activists and policemen including Mahendra Karma, the bitter enemy of the oppressed people of Bastar…’

This is the opening of a 3,000 word press note from the Communist Party of India-Maoist. It makes it clear that the principal target was Karma, founder of Salwa Judum, a mercenary force of adivasis raised since 2005 to be pitted against adivasis mobilized by Maoists.

How distant the state and the Maoists are becomes clear at the manner of Karma’s death. In the convoy studded with Congress stars, Karma had the highest form of security: Z category. Yet, the Maoists, mostly women, surrounded him. They riddled him with bullets, plunged knives into his cold body and danced around it. The Congress ran around trying to hide its shame. Earlier it was only whispered that it supports Salwa Judum, against which there are Supreme Court strictures. It turns out that the Salwa Judum is in fact a large part of the state Congress.

The manner of his killing should leave no one in any doubt where Karma stood in Maoists’ esteem: a bleak and shoddy villain of history. Since he was the numero uno in the Congress convoy, one would expect the party to deify him as something of a martyr at some appropriate date.

The prime minister’s vision is straightforward. His eyes are not on the adivasis but on the mineral that lies buried in their lands and to which the multinational miners must have unhindered access. Maoists are spoiling the party by citing the indigenous people’s interests. Can mere adivasis be allowed to obstruct the path paved with good intentions?

In this land of startling contradictions, the Adi Shankara stands on the highest social pedestal, but the adivasi or the original inhabitant has no station, not even the lowest. The adivasi, in millennia past, was pushed into the forest by those who displaced him in the plains. Ancient texts describe the dwellers of the forests as Rakshas or ‘demons’.

If these ‘demons’ can be subjugated, (goes one theory) they will be amenable to better management within the caste framework. Yes, they will be transformed into brooding Dalits at the outset but who may, at some later stage, erupt as durable political entities like, say, Mayawati.

That may not be the happiest of outcomes, but draw what comfort you can from the fact that Mayawati is at least part of the caste pyramid. The adivasi is challenging the pyramid from the outside. He is asking for a fair deal from an equal.

Another complication. A Congress chief minister in Bhopal would have seen Chattisgarh differently from the UPA which sees the mine belt from its New Delhi’s vantage point.

As chief minister, Digvijay Singh, for example, would have fallen back on his political experience. He would have been more familiar with the topography of Chattisgarh, as is Ajit Jogi. His and Jogi’s basic instinct would be to fight the BJP tooth and nail – politically.

The Manmohan Singh-Chidambaram line is to seek cooperation of the BJP for the economic policies which will end up clawing at tribal lands.

Since independence, New Delhi and Bhopal have only talked of development but in effect sought to subdue regions like Bastar with force.

In 1966, Dwarka Prasad Mishra, the powerful chief minister of Madhya Pradesh, was infuriated by the immense popularity of Pravir Chandra Bhanj Deo, the king of Bastar who obstructed the state machinery from encroaching on tribal lands. In a dramatic showdown, paramilitary forces killed the king and his guards who waged a quaintly symbolic battle with bows and arrows.

The state’s list of grievances against the Maoists includes the fact that they don’t accept Western, liberal democracy for transiting from their current dismal state to civilization. But Bastar’s king had accepted the democratic model and won by a record margin the 1957 assembly election from Jagdalpur. The state killed him, nevertheless.

Remember Chidambaram’s lamentation as home minister after the Dantewada humiliation? He said he was having to fight the ‘merciless’ Maoists with his hands tied behind his back. The home ministry had in those days floated the line that chief ministers of West Bengal, Maharashtra, Andhra Pradesh, Chattisgarh and Orissa ‘were asking for air support to fight Maoists’. Congress leader Keshava Rao and a host of others had opposed the line as did Defence Minister A.K. Antony.

The timing of the Congress Parivartan Yatra in Chattisgarh and the dramatic ambush have been most unfortunate. Should New Delhi now focus on the Maoists and control the insurgency? Or should it keep a steady gaze on votes until the November election? The two approaches lead to different destinations.