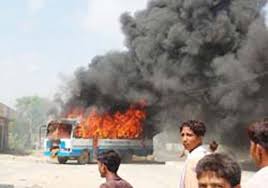 ohtak (Haryana): Angry mobs clashed with the police and set two buses on fire during a violent protest against the opening of an ashram of a controversial godman near here Sunday, an official said.

Some protestors were injured in the violence. The police had to resort to cane charge and use tear gas shells to disperse the irate mobs, the official said. Rohtak is 70 km from national capital New Delhi.

The crowds, mostly of activists from the Arya Samaj sect, were protesting against the opening of the Satlok Ashram headed by godman Rampal at Karontha village, 10 km from here.

Nearly 10,000 supporters of Rampal had gathered inside the ashram complex to respond to any attack on the premises.

The protestors marched towards the ashram when they were stopped by the police on the Rohtak-Jhajjar national highway.

Police officials said that the protestors went on a rampage and damaged public buses and police vehicles. The police charged at the mobs with canes and fired tear-gas shells to disperse them and the protestors retaliated by pelting stones at the police force.

Tension had been brewing in the area for the past week following an opposition to the ashram by the Arya Samaj members. They were joined by residents of Karontha village in the protests Sunday.

“The situation at the spot is still tense. We have sought reinforcements,” a police officer said.