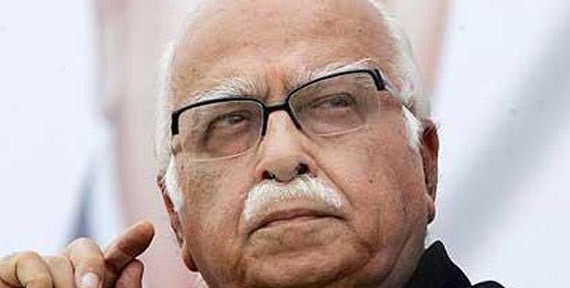 New Delhi: Terming the electoral outcome in Karnataka not surprising, BJP leader L.K. Advani today said the party had erred in not taking immediate firm action on allegations of corruption against B.S. Yeddyurappa and its handling of the state had been “absolutely opportunistic”.

He also demanded resignation of Prime Minister Manmohan Singh after reports that he had to be nudged in asking Pawan Kumar Bansal and Ashwani Kumar to resign as union ministers.

In the latest post on his blog, Advani said he felt sorry for the party’s loss in Karnataka but he was not surprised.

“The surprise would have been if we had won,” he said.

The Bharatiya Janata Party (BJP) leader said that if the party had immediately taken firm action when it became apparent that Yedyurappa, its first chief minister in south India, was “unabashedly indulging in corruption”, the course of events would have been quite different.

He said Karnataka results had a profound lesson for his party as its tally came down to 40 from 110 in 2008 but also had one for the Congress.

“The common lesson for both of us is: let’s not take the common man for granted… If corruption provokes indignation in Bangalore, why would it not cause the same feeling in New Delhi,” he asked.

Advani claimed that the common man may occasionally deviate from the norms of ethical conduct, but does feel extremely angry when he sees those at the helm of national affairs behaving immorally.

He said it was a reason for intense allergy towards politicians generally witnessed nowadays.

Referring to media reports that the BJP lost Karnataka because it threw out Yeddyurappa, Advani said the former chief minister left the party on his own.

“Let me first point out that BJP did not throw out Yeddyurappa; it is he who broke away from the BJP and decided to form a factional party of his own, the KJP,” he said, adding that the party had kept up frantic efforts for several months to keep placating Yeddyurappa.

“The justification given was that if the party did not adopt such a ‘pragmatic’ approach we would lose the only government that we had in the south,” he said.

He contrasted this with an example of Jan Sangh, the precursor of BJP, which faced the situation of having to expel six of eight legislators in Rajasthan after 1952 elections over their refusal to abide by the party line on abolition of jagirdari system. Advani said the then party chief Shyama Prasad Mookerji had told the party not to hesitate in taking disciplinary action.

He said while instances can be cited when other parties get away with gross misdemeanours, BJP should realise that the yardstick by which the people judge it was not the same by which they judge other parties.

He said BJP had aroused high expectations in people by its track record and even minor indiscretions can prove costly.

“And our response to the Karnataka crisis was not at all a minor indiscretion. I have consistently maintained that our handling of Karnataka has been absolutely opportunistic,” he said.

Referring to reports in a newspaper that Congress president Sonia Gandhi will meet senior party leaders soon to discuss the cabinet reshuffle, Advani asked if the prime minister “had abdicated his right even to decide about his own cabinet”.

Citing news reports that it was Gandhi who was instrumental in sacking “two PM’s men”, Advani said that “sheer self-respect demands that the PM calls it a day, and orders an early general election”.