Chandigarh: When Congress vice president Rahul Gandhi came to Haryana, Chief Minister Bhupinder Singh Hooda and his associates put their best foot forward. However Congress leader Selja, a MP from Haryana, caused a sensation by taking on the Hooda government. 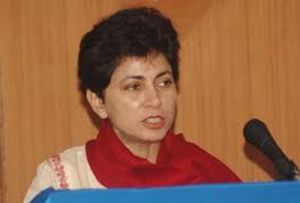 As Gandhi addressed Haryana Congress leaders Wednesday, he was all praise for Hooda and the party’s state unit.

Selja, the central minister for social justice and poverty alleviation, had another story to tell.

A known Hooda detractor, Selja complained that the Hooda government, especially the bureaucracy, was not listening to elected leaders. She said that in certain instances bureaucrats were not shifted out despite complaints to the government.

She told Rahul Gandhi that she had faced infighting within the Congress in the 2009 general election when the party won nine of the state’s 10 Lok Sabha seats.

She also raised the issue of growing incidents of atrocities on Dalits in Haryana. She said the state government should ensure that law and order prevailed in Haryana.

In recent times, Dalits have been targeted by upper castes in Hisar and Kaithal districts.

This is not the first time Selja has taken on the Hooda government.

In October last year, Selja was said to have been instrumental in bringing Sonia Gandhi to Sachhakhera village in Jind district after a teenage girl set herself on fire after being gang-raped.

The Hooda government, which had been taking rape cases casually till then, was shaken up. Hooda and his ministers rushed to the village to be in attendance for the visit of the Congress president.

Though the entire leadership of the Congress in Haryana was present during Rahul Gandhi’s visit, Rao Inderjit Singh, a leader from the Gurgaon belt, was conspicuous by his absence.

Singh, a former union minister of state for defence, has been at loggerheads with Hooda for some time. He had earlier this year floated an organisation to seek “justice” for south Haryana.

Hooda’s detractors have in recent months trained their guns on the chief minister, claiming that only certain areas in Haryana, especially Hooda’s home district Rohtak, were getting preference in development works.

With the Lok Sabha and Haryana assembly election due next year, Congress leaders in Haryana need to iron out their differences.