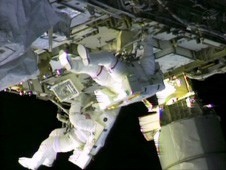 Moscow, May 12 (IANS/RIA Novosti) NASA has said that the Expedition 35 crew members have begun a six-hour spacewalk in a bid to fix an ammonia leak in a cooling loop.

The leak was reported to mission control in Houston Thursday, when the ISS crew said they could see “a very steady stream” of small white flakes floating away.

The astronauts used hand-held cameras and, with help from mission control, were able to narrow down the location of the leak to the truss.

They also determined that the rate at which ammonia was seeping out of the cooling loop was increasing.

Chilled liquid ammonia is used to cool the power channels on the ISS’ eight solar array panels, which supply electricity to the ISS.

Each solar array has its own cooling loop.

The ammonia loop where the leak was detected is the same one that spacewalkers tried to fix a leak on in November last year, NASA said.

In Moscow, an official from the Russian space agency said the leak had occurred in the US portion of the vessel.