Srinagar: As the temperatures rise in the plains so do the tourist arrivals in Kashmir, with people associated with the industry praying for another record season this summer. 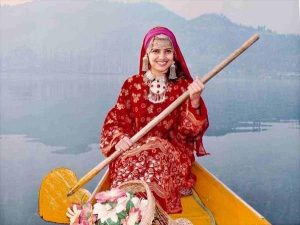 Scores of vehicles daily ferry tourists to north Kashmir’s Sonamarg and Gulmarg and south Kashmir Pahalgam tourist resorts besides those carrying them to the Manasbal Lake in Ganderbal district, the Mughal Gardens in Srinagar district and other places.

Hotels on the fashionable Boulevard Road along the Dal Lake here are running with 60 percent occupancy these days and so are the houseboats on the Lake.

“This time our occupancy is 60 percent,” Muhammad Azim Tuman, president of the houseboat owners association, told. “We are expecting more arrivals after the middle of this month when schools get their summer recess in Gujarat and Maharashtra. Hopefully, we have a good season ahead,” he added.

Interestingly, Tuman had expressed apprehension while talking to in the aftermath of Parliament attack convict Afzal Guru’s hanging on February 9. He had then said this year’s tourist season could be a washout in Kashmir.

The reaction of tourists belie that.

“We see something different here. Kashmir is totally blessed with beauty by nature. It is an overwhelming experience,” said 32-year-old Ravi, a tourist from Kerala.

Vikram from Mumbai said: “You cannot stay outside for more than five minutes in Mumbai and Bangalore and over here you wear jackets. That is what the weather is in Kashmir this time.”

Sunaena from Chennai said: “The weather is so beautiful here; you cannot believe it is summer. That is why Kashmir is called Janat”.

Rajesh from Mumbai wondered what the winter would be like in Kashmir if the summer was so cool.

Although the arrivals for this time of the year are lower than that for the same period last year, tourism department officials said they would pick up in the coming days.

“This is less than the 6,000 daily arrivals we had during this time of the season last year, but things will improve in the coming days,” the official added.

Rouf Tramboo, president of the Travel Agents Association of Kashmir (TAAK), told: “The tourism scene is good this time, but we are expecting more arrivals after May 15 when the summer holidays begin in other states.”

“We have also been in touch with the various flight operators to ensure that the number of arrivals is increased to 35 daily to cater to the increasing demand in the coming days. Besides, we have also been promised that evening flights would soon be operated to and from the Srinagar International Airport,” he added.

The state government is organizing a tourism fest here next week, besides running advertisements in newspapers and other publications outside the state, to give a fillip to the industry.