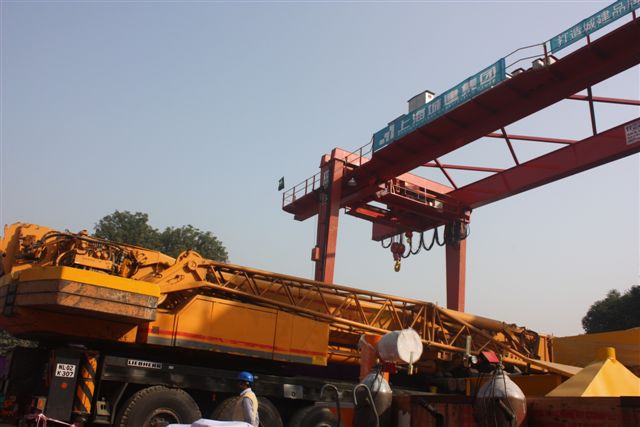 New Delhi, May 8 (IANS) Amid the media brouhaha in India over the border incursions by their troops, Chinese engineers were last week calmly tunneling in the heart of the national capital for the heritage line of the Delhi Metro network, signifying the growing commercial linkages between the two neighbours.

Engineers of the Shanghai Urban Construction Group (SUCG) lowered a massive 300-tonne Tunnel Boring Machine (TBM) into a crater that was once a park in the shadows of the city’s main mosque – the 17th century Jama Masjid in old Delhi.

A station will be built here as part of the Delhi Metro’s 9.37 km Central Secretariat- Kashmiri Gate corridor, also called the heritage line because of its proximity to many monuments.

“Tunneling this section is quite a difficult and sensitive job because of so many historic monuments here. The task is complicated by the rocky and sandy nature of the soil in this section,” Lu Yuanqiang, chairman, SUCG Infrastructure India, told IANS on location.

SUCG has formed a joint venture (JV) with Indian conglomerate L&amp;T that has been awarded different projects by the Delhi Metro Rail Corporation (DMRC). With another Indian company, it has already constructed the New Delhi Elevated Subway (viaduct) for the second phase of DMRC’s project.

Lu said his company had the expertise required to stabilise the soil in rocky areas where tunneling disturbs stability and increases the risk of subsidence.

On the Mandi House-ITO section of the line, where soil conditions were much better, 500 metres (of the 750-metre long section) of tunnel had been constructed, he said.

The heritage line is located nine metres below the existing ramp for the Dwarka-Noida/Vaishali line and runs for 80 metres along the corridor.

“The work has to be meticulous as it’s coming up under an operational corridor,” Shen Chenming, the project director, told IANS. Shen, who has been in Delhi for nearly five years, leads the workforce that is largely Chinese.

Lu pointed out the difficulties that could arise from externalities in what is otherwise a fruitful collaboration between Indian and Chinese businesses.

“Specifically we face visa problems, delays and uncertainties if the relationship runs into complications for political reasons,” he said.

From the business perspective, he had special praise for India, where, he said, public opinion ensures that it is “fair” for those wanting to do business.

“India is a very important market for us. The Indian market is open, fair and just, while active public opinion ensures this, at least from our experience in the contsruction sector,” Lu said.

The SUCG-L&amp;T JV also has the contract for constructing the tunnel and stations for the Delhi Metro’s Vasant Vihar-Hauz Khas section.

(Biswajit Choudhury can be contacted at [email protected])