Many people noticed that the international media was shockingly selective in its news coverage this month. This columnist knows the mindset of foreign correspondents intimately, so here’s an EXCLUSIVE INTERVIEW on the subject that just took place in a dark corner of my imagination. 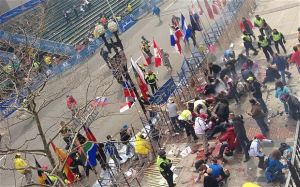 Q: Hundreds of people were killed recently in tragic bombings and earthquakes, particularly in Asia. Why did the global media focus on the tiniest of these events, just three dead in Boston?

A: Because Boston is in the United States, which covers most of the world’s surface. Asia is a tiny place on the dark side of the earth, far away from where most people live.

Q: Actually, I think you’ll find the majority of the world’s population lives in Asia.

Q: Last week you printed an article about space voyages to Mars. That’s further away than Asia.

A: That’s total bull. Mars is in America. It’s a reddish dot in the US night sky.

A: We do! But you people die in war zones every day. The difference is that Boston was a peaceful town hit by sudden tragedy.

Q: The hundreds who died in China and Pakistan the same week were in peaceful towns hit by sudden tragedy.

A: Look, it’s a technical, journalistic thing. Boston had more ‘news value’ than the other stories.

Q: You mean the secret rule that one white person is equivalent to 30 non-whites?

A: That is not true at all! It’s at least 50 non-whites. Anyway, I’m going to have to end this and get back to work. There’s a MEGA international news story breaking.

A: No, I said MEGA. A group of celebrities have just hit a California beach in bikinis to show they have regained their pre-baby bods.

North Korean officials said they will shortly launch a campaign to bring the US economy to a catastrophic halt. Too late, lads. Some guy called Bush did it five years ago.

Women even put on make-up when packages are due to be delivered, a sad staffer told News Post Seven, a Japanese website. As soon as the women open the door, their shocked faces reveal their thoughts. ‘Eww! You’re a hideous-looking short, fat, bald guy, i.e., an average man,’ their eyes, and sometimes their lips, say.

But the company is not planning to change its campaign, since it’s too profitable. A staff member who does look like the guys in the ads said women who liked looking at him ‘called for package pick-up every day’.

I used to know an Australian tennis coach who offered lessons to bored housewives. He mostly just visited and drank tea with them, taking off his shirt if it was warm. ‘I was really being paid to be a decorative object,’ he told me. What more evidence is needed that being too good-looking should be classified as a crime?

Ever felt sorry for the victims in James Bond movies, who were often eaten by piranhas? Now you can take revenge on their behalf. Nara Kenko Land, a restaurant in Nara, Japan, is encouraging diners to chow down on piranhas, sharp-toothed fish which can strip a human to a skeleton in seconds. I would love to invite short-tempered TV chef Gordon Ramsay to this eatery. ‘Where the #$%^ are the fish ordered by table nine? Don’t bother, I’ll get them myself.’ (Reaches into live fish tank.) ‘Arrrrrgh.’

Scientists have created a water bottle that takes the colour out of Coca-Cola. All you do is pour the fizzy dark liquid into the OKO plastic bottle, made in Japan, and it comes out clear. A super-powerful filter in the lid removes the colour, so the drink emerges as scary, chemical-spiked sugar water. So, no change there.

A woman carrying a bag of durians was stopped at the boarding gate to an aircraft last week. Staff explained that the famously stinky fruit was strictly banned from aircraft.

The pleading woman argued that she’d spent a fortune and the fruit was not available where she was going. Staff refused to make an exception.

So she sat down and started eating it. She munched through three kilos of the ultra-smelly fruit, stinking out the whole departure lounge at Guangzhou Baiyun International Airport, according to a report in RocketNews24.

As a frequent traveler, I can testify that every day in major airports you see angry people moving their purchases from their luggage to their stomachs. At some airports, caviar, honey, peanut butter and those soft cheeses that move by themselves are classified as ‘illegal liquids’.

Airport security departments should really supply tables, chairs and cutlery at security gates for this purpose. It would fix their awful image.

One security guard took stuff off a guy saying ‘it could be melted down into a liquid’. That’s ridiculous. Metal can be melted into a liquid, which means that it is now illegal to take a plane into the air.

A reader saw an Australian traveller stopped for carrying a bottle of spirits. He simply opened it and drank the lot. Technically, he should then have been detained for trying to board a plane in a drunken state. But no one wanted to go near him.

Did you hear about that housewife from Mumbai, India, who had to be operated on after she had failed to go to the toilet for 45 days? The Times of India said that when doctors at the Nova Specialty Surgery Centre asked her when she had last used the bathroom, she said: ‘Towards the end of February.’ I am going to show this to my daughters who spend many hours a day in the smallest room. Once a month should be plenty.

Oscar winner Reese Witherspoon, arrested in her car last week, said to cops: ‘Do you know who I am?’ Why do they always say that? If they know she’s a Hollywood brat, doesn’t that make it MORE likely she’s crazy drunk?

The guy who did Gangnam Style has just released a new song. Would the South Korean authorities please note, if you want sympathy from the rest of the world, this is SERIOUSLY not the way to go about it.

(26.04.2013 – Nury Vittachi is an Asia-based frequent traveller. Send ideas or comments via www.mrjam.org)