Dharamsala: Moved by the plight of the people of Tibet, 21 US senators have jointly asked Secretary of State John F. Kerry to make Tibet an integral issue when he visits China this week.

The senators Thursday urged the resumption of dialogue between China and Tibetan representatives, saying: “We view the Tibet problem as a resolvable issue.” 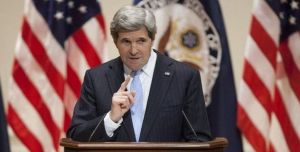 In a missive to Kerry, who is visiting China April 13, the senators said the situation in Tibet was at crisis point. “We are witnessing a cycle of repression, protest, and further repression, which threatens to escalate into further instability,” they said.

“We commend the Tibetan exile leadership led by Sikyong (prime minister) Lobsang Sangay for consistently and categorically discouraging Tibetans in Tibet from self-immolating as a form of protest.”

Unfortunately, the letter said, the Chinese government has failed to respond to the calls for a change in its policies towards Tibet and to respect the rights and dignity of Tibetans.

In fact, by commencing prosecutions of Tibetans allegedly associated with acts of self-immolation, Chinese authorities are making things worse, they said.

“While the Chinese government’s external stance on the Tibet issue conveys intransigence, there are still hopes that dialogue could resume between China’s new regime — led by Xi Jinping, whose father had ties to the Dalai Lama — and Tibetan representatives,” they said.

They also called for coordinating with other governments on implementation of the recommendations made by UN High Commissioner Navi Pillay, including allowing access by independent and impartial monitors to assess conditions on the ground in Tibet.

Tibetan spiritual leader, the Dalai Lama, who is currently touring Italy, Wednesday said: “Those who are pursuing this course of action (self-immolation) are doing so not because they are drunk or beset by family problems but because of the desperate situation in which they find themselves.”

More than 114 monks, nuns and common people, a majority of them teenagers, have set themselves afire in Tibet since 2009 to protest against Beijing’s “repressive policies” and the demand of the Dalai Lama’s return to his homeland, according to the Tibetan government-in-exile based here.

The Dalai Lama has lived in India since fleeing his homeland in 1959.