Stavanger (Norway) : While back in India one recalls the sculptors that were got commissioned by the then Maharaja of Kapurthala at various places in Kapurthala city, which earned for itself the sobriquet, ‘Paris of the East’, the sand blasted iron sculptors, in Stavanger are often referred to as ‘Broken Column’.
According to the Stavanger 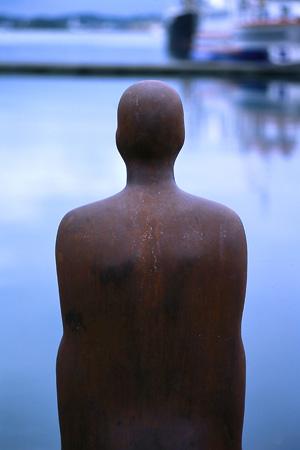 Region website, the 23 iron sculptures, all 1.95 meters tall, have been placed in and around Stavanger’s City Center. Some have been erected outdoors and some inside shops, schools and even a private home.

The artwork is made by Antony Gormley, a London-based sculpter also known for “Another Place”. The project is said to have been financed by the Municipality of Stavanger, Stavanger Art Society and Rogaland Art Museum. Each sculpture, which incidentally stands 1.95 metres tall, said to be the height of the sculptor himself, is also fitted 1.95 meters lower than the previous.

The first iron man, the figures of which are based on the cast of the sculptor’s own body, is placed at the Art museum some 40 meters above sea level. The last sculpture, which is number 23, stands on a rock in the sea just outside of Natvigs Minde, downtown Stavanger, with 149 of its 195 cms under water. An interesting factor is that all the sculptors face 10 degrees West looking out towards the sea.

Locals here claimed that the ‘Fish Market’ sculpture is the one that has given the direction for the rest of the sculptures. Each sculpture is also placed in a specific height. Sculpture no. 1 is located at Stavanger museum of fine arts and it is located at 41.41 meters above sea level. Sculpture number 2 is 41.41 – 1.95 = 39.45 meter above sea level and this continues until the last one located 1.23 meters below sea level at Natvigs Minde.

Gormley, is reported to have highlighted the diversity of activities that take place in the city by placing each sculpture in a particular context, a place that represents an aspect of human existence in the city. All the 23 sculptures are connected by similarity, altitude and direction. They also form an imaginary column that is scattered or broken, and hence the name ‘Broken Column’.

About the artist, Antony Gormley is said to be among the leading sculptors in the world. In 1994 he won the prestigious Turner Prize, and in 1997 received Order of the British Empire for his work on the development of sculpture. Gormley has more public sculptures in the world.
As the sculptures continue, site by site, establishing a broken column with sites spread throughout the cityscape, which is probably why the name. Each site-specific placement represents a contrasting point to the project as a whole. The character of each site was chosen on the basis of its relation to the artistic idea, and thus each placement is linked to one another with regards to the final project. The completed work is not only balanced out on a map of the city, but each site is also in a finite balance in relation with the others.
It is also said that the placement of the figures reflect a broad perspective of people’s life in the city. From the teeming life of the harbour, the din of traffic and bustling activities in the commercial quarter, to the courts and legal offices, the quiet calm of the cemetery and even private lives behind closed quarters, as one of the figures is placed in a private house.