The issue of dual power centres has hit the ruling United Progressive Alliance prompting both Prime Minister Manmohan Singh and the Congress to dismiss it as a “useless debate” and a “media creation”. The BJP says the model failed to deliver, while the CPI says it shouldn’t interfere with governance.

“This is the creation of the media. It is a useless debate,” the prime minister had said. 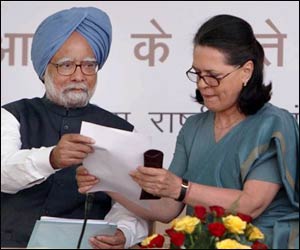 The issue cropped up after party general secretary Digvijaya Singh recently said that the two power centres – Congress chief Sonia Gandhi and Prime Minister Manmohan Singh – had not worked well and should not be repeated by Congress vice president Rahul Gandhi in case the party comes to power after the 2014 general elections.

Senior Congress leader Janardan Dwivedi had countered by saying the Sonia-Manmohan model was a successful one and could be used in the future as well.

“The relationship between Sonia Gandhi and the PM is a model for the future. The party will decide at a later time who will lead the 2014 election campaign. Manmohan Singh is the leader now and every one accepts him,” Dwivedi had said.

Rahul Gandhi, who wants to revive the party, has said the question of his becoming prime minister was irrelevant.

The Congress said there were no differences on the issue between the prime minister and the party.

“The prime minister has not made any statement that is contradictory to what Janardanji said,” Congress spokesperson Rashid Alvi told IANS.

“Janardanji had said that the Congress party is an organisation and Sonia Gandhi its president, Rahul Gandhi is vice president and Manmohan Singh is the prime minister,” he said, adding “the government does its own work and the party its own and there is no contradiction in this.”

According to the Congress spokesperson, on many occasions the party president has been different from the prime minister.

“The Congress manifesto goes to people and they vote on it. The government’s job is to implement the manifesto and the role of the party leadership is to give direction,” said Alvi.

The Bharatiya Janata Party said the power sharing model has failed to deliver.

“What is to be debated is if this is such an exemplary model then I dread what is in store for India. In the past nine years the economy has plummeted, prices have gone up; there is no accountability,” BJP spokesperson Nirmala Sitharaman told IANS.

Communist Party of India leader D Raja told IANS: “If the model interfered with governance then it is a concern. Otherwise it is a party structure.”

Political analysts wondered why the issue was being debated now.

“That model has been in place for the past nine years. It was not questioned earlier. Why should it be debated now?” asked Mridula Mukherjee, who teaches social science at Jawaharlal Nehru University, while speaking to IANS.

“Governance can’t be reduced to a formula,” she said.

While Nisar-ul Haque, who teaches political science at Jamia Millia Islamia University, said the “Sonia-Manmohan are a good team,” N. Bhaskara Rao of the Centre for Media Studies told IANS that “it is not an issue”.