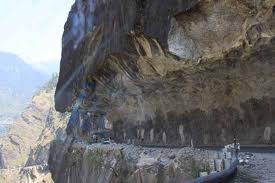 Shimla: The proposed road project to link this Himachal Pradesh capital with the picturesque Spiti Valley has been delayed on account of the failure to obtain forest clearance for it, Chief Minister Virbhadra Singh said Friday.

“The mandatory clearance under the Forest (Conservation) Act has not been obtained,” the chief minister told the assembly in a written reply.

The proposed project will shorten the distance between Shimla and Kaza in Lahaul-Spiti district by 100 km.

“The construction has been delayed due to a wildlife sanctuary and some forest land,” he said, adding that the road would also pass through private lands and the owners are not willing to donate their land for the road.

The picturesque Spiti Valley, some 410 km from Shimla, is famous for its old Buddhist monasteries. Mane, Dhankar, Tabo, Gungri, Mud, Lidang, Rangrik, Key, Losar and Hikkim are the prominent monasteries in the area.