Shimla: Removing old guard BJP leader Shanta Kumar from the party national executive has had a fallout as the state unit recast its team here which found most loyalists of the senior leader missing on the lists declared.

Political observers believe that BJP in Kangra, the home district of Shanta Kumar, winning only 3 of the 15 seats in the recent assembly elections, it was time to cut the senior leader to size.

Barring Ramesh Dhwala and Kishan Kapoor, no leader from the Shanta faction appears to have found a place on the 40 member state office bearers list made public by party president Satpal Satti. 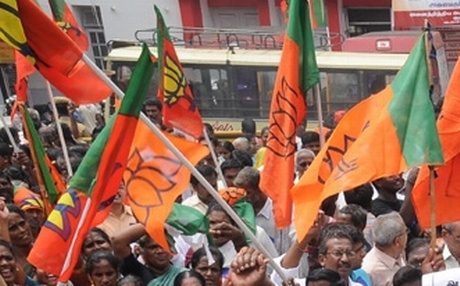 What’s more, creating new organizational districts by fragmenting Kangra into 4 organizational party segments has only further weakened the hold of the senior leader in the district.

Party insiders also say that it was Shanta Kumar, who was on target in Kangra, in Mandi, it was Jairam Thakur, a four time MLA and a former state party president who was cut to size in the party revamping exercise.

By breaking up Shimla district, the third largest district into two organizational units of Shimla and Mahasu, the clout of senior leader Suresh Bhardwaj in the party stands reduced.

The man to watch out is Jagat Prakash Nadda, the former minister, MP and BJP national general secretary. Before moving to central politics, Nadda had resigned as a minister from the Prem Kumar Dhumal cabinet, only to join Nitin Gadkhari’s team in Delhi.

By retaining Anurag Thakur as the National Bharatiya Janta Yuva Morcha President, a balance has been attempted to be maintained between the aspirations of Nadda and Anurag Thakur.

With the Shanta Kumar camp on the retreat and former chief minister Dhumal’s faction dominating the party positions, observers opine that it will not be long before the old guard groups around Nadda to challenge the party leadership in Himachal Pradesh.

Though Dhumal currently has a free run in the party here but conscious efforts to promote son Anurag Thakur and reduce the clout of other senior leaders like Jai Ram Thakur and Suresh Bhardwa that is keenly being watched by the state party unit.

Pawan Kumar Rana, Ganesh Dutt, Parveen Sharma and Kirpal Parmar stand given the task of state spokespersons and Ashok Kapatia, Himanshu Mishra, Pravin Sharma and Hari Om Bhanot are others who have been picked up for the media team.