Considered as one of the progressive states for its hard-working population, Punjab holds an imperatively strategic geo-political location in the country too. The food bowl of India that also provides thousands of dollars in terms of remittances to the Indian exchequer has come a long way since the days of Khalistan movement; at least in terms of time lapsed. Recently, a movie named “Sadda Haq” made huge noises, especially in Punjab. 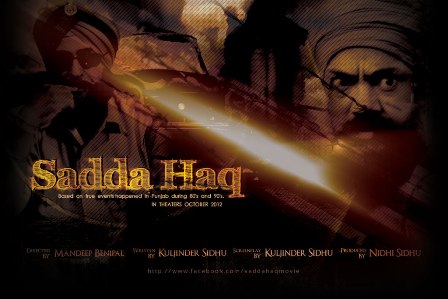 The flick was banned (now set to release on 10th May) across India for its volatile plot now and bid to glorify some pro-Khalistan characters including Jarnail Singh Bhindrawale, Balwant Singh Rajoana and Jagtar Singh Hawara.

Nevertheless, the picture was released in Canada, US and Australia and amassed huge earnings at the box office, as per the latest reports.

Most interestingly, the youth (following pro-Khalistan ideology) that migrated in those countries are not only supporting the content but propagating it through all the available mediums. The movie clips are uploaded on Facebook for the people back in India to watch.

Special screenings are organized for the people on a daily basis and organizations such as Sikhs for Justice (SFJ) have begun an international crusade in US and Canada to propagate their cause through the medium of the movie.

It is an open secret that pro-Khalistan feelings haven’t died down entirely in Punjab or its neighboring areas and support(although silent) could be witnessed in the form of images of Jarnail Singh Bhindrawale (in particular) printed on the T-shirts and back of vehicles on the roads frequently.

The obsession to glorify pro-Khalistan leaders of the time has escalated manifold in recent years in the region’s youth.

The violent era of 1980’s and 90’s was surely a dark blot in the history of the land of five rivers when more human lives were lost than seeds sown in the fertile lands of the state. However, with time, the separatist movement was weakened considerably only to shift its base to Canada, US, Australia and other foreign lands.

When movies such as “Sadda Haq” and “Hawaein” are released, a new sense of belief is instilled in groups working on separatist ideology and they re-unite to prop up their cause whole heartedly.

“Sadda Haq” showcases how human rights of a particular religious minority were violated in Punjab during the 1980-90s.

Although, the description of the tale is highly one-sided (as per majority of reviewers) and against state machinery but banning the movie when Naxalism based movies such as “Chakaravyuh” finds their release into the mainstream is bit baffling.

The decision to outlaw the movie has further strengthened the feelings of people in the region that the Central government is anti-minority and even their elected government of Shiromani Akali Dal (SAD) couldn’t be trusted.

The split between SAD, the SGPC and the Akal Takht was clearly witnessed during the decision of banning when SAD quite unexpectedly worked against the wishes of the latter two.

The movie gained all the more mileage when already many portions of Punjab were in anguish resenting rejection of death row clemency petition of Devinder Pal Singh Bhullar, convict in car bomb blast in Delhi, by the Supreme Court.

The unjustified delay (around 30 years) in providing justice to the 1984 riots is already a constant source of anger for the people.

With the state’s economy passing through rough patch the circumstances are very challenging presently. The social evil of drug addiction is on increase among unemployed youth.

In addition, the youth that reaches greener pastures in search of employment are deeply influenced by such groups (with pro-Khalistan ideology) for the amount of help they receive at their hands in the early days of their stay over there.

Undoubtedly, anti-India and pro-Khalistan feelings are rearing up in some regions of Punjab and abroad. The matters are more multifaceted than they appear and better tackled at the earliest.

Otherwise, such movies would keep rolling out and political parties face hard-hitting time providing explanation for banning them as in this case where I&B minister, Manish Tiwari, who hails from Amritsar couldn’t fittingly justify the prohibition of “Sadda Haq” even to his own people.