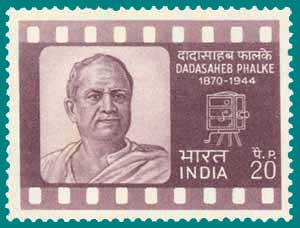 Mumbai: A hundred years after “Lights, Camera, Action.” were uttered for the first time in India by Dhundiraj Govind Phalke – Dadasaheb Phalke, known as the ‘Father of Indian Cinema’ – his descendents have sought a befitting recognition of his contribution by posthumously conferring him the Bharat Ratna, the country’s highest civilian honour.

Two grandsons of Phalke, whose 143rd birth anniversary falls April 30, say even their grandmother – Saraswati – who was India’s first film technician, should also be accorded a similar honor.

“When Dadasaheb Phalke was all alone, she stood by him like a rock. Saraswati managed her family of nine children, held white bedsheets for hours in the blazing sun as a light reflector, mixed film developing chemicals, perforated the raw film sheets at night in the light of a candle, cooked food for the entire film unit comprising 60-70 people and generally was his Woman Friday,” said one of the grandsons, Chandrashekhar Pusalkar.

Another grandson, Kiran Phalke, said that the only time the Indian government took note of the family’s existence was during the birth centenary of Dadasaheb Phalke celebrated in Mumbai and other places in 1970. Both grandsons live in Mumbai.

“I remember seeing a letter scrawled with a pencil by Dadasaheb Phalke to his son Bhalchandra around the late 1930s: ‘Son, I don’t have money even to buy poison.Please help.’ It moves me to tears even today,” Kiran Phalke told IANS, remembering the herculean struggles of his grandfather in those pioneering days.

The family is upset that in the 44 years that the country’s highest film honour, the Dadasaheb Phalke Award has been given, his descendents have neither been consulted or invited even once.

“Yes, there is a stamp in his honour, some roads, and Mumbai’s film city is dedicated to him. There are statues in Mumbai and Nashik, besides the annual top film honour and other token international recognition. However, we think both Dadasaheb and Saraswati deserve a Bharat Ratna.and we must be invited to witness the presentation. The centenary year of Indian cinema is the most appropriate occasion,” Pusalkar, 62, told IANS.

Kiran Phalke, 67, said that the government must set up a film training institute in Nashik, a few km away from Triambakeshwar, where Dadasaheb Phalke was born April 30, 1870.

The grandsons rue that over the years, the government took no measures to preserve his old bungalow in Nashik – named ‘Hind-Cine Janakashram’ meaning the house of the man who started Indian cinema – dedicated to the very Indian cinema which he founded!

A major tourist attraction during his lifetime, the bungalow was razed and redeveloped by one of the descendents. Only a Nashik Municipal Corporation signboard now says: “Here lived Dadasaheb Phalke…”

Even Phalke’s favourite car, a Ford, used in his heyday for travel and shooting in the 1920s, had to be sold when his fortunes plummeted in 1930s. The new buyer hired it out for weddings!

When it was found in a Nashik dumpyard five years ago, Maharashtra Navnirman Sena Raj Thackeray promised to get it restored, but nothing was done.

Recounting anecdotes of the legendary Dadasaheb Phalke’s life, both Kiran Phalke and Pusalkar said Dadasaheb underwent tremendous travails and tribulations in those days.

“He brought the first movie camera from Germany, but nobody knows what happened to it afterwards. Maybe it is lying with some antique collector. There were absolutely no film-making facilities – production or distribution – available as people believed films had no future. But, whatever he did from scratch set a precedent for the future generations of film-makers,” Kiran Phalke said.

Dadasaheb’s family helped in their own humble ways – besides Saraswati who was the de facto one-woman army behind the camera while he handled the shooting nitty-gritties. His eldest son Bhalchandra became the first child star in “Raja Harishchandra” which created Indian cinema history on May 3, 1913.

Dadasaheb’s elder daughter (of his seven sons &amp; two daughters), Mandakini, was the country’s first female child star – and as a five-year old, appeared as the child Lord Krishna in two movies – “Shree Krishna Janma” and “Kaliya Mardan”. Both movies were super hits.

“As was the norm in that era when all female roles were played by male actors, Mandakini retired, only to emerge in front of a camera for a BBC interview at the age of 74! She died two years later,” Pusalkar said.

.Ironically, the virtually homeless Dadasaheb Phalke could build a shelter for his family only around 1938, when he was presented a purse of a princely sum of Rs.5,000 by the great V. Shantaram to mark the silver jubilee of Indian cinema.

Dadasaheb quietly sat in a far corner of the auditorium and was virtually unnoticed till V. Shantaram asked him to be escorted to the stage.!

“Many feared he would spend even that money on making films. Luckily, he heeded some close friends’ advice and finally built a house in Nashik where he lived till his death,” said Kiran Phalke.

Despite his great fame worldwide – postcards bearing only his name: “D.G.Phalke, India” promptly reached him in Nashik – when he died February 2, 1944, barely a dozen turned up for his funeral.

“All the cinema halls continued to exhibit movies as usual, and even most national newspapers missed his death news,” Pusalkar rued.

The grandsons now feel the time is ripe to honor the man who changed the course of history with his humble camera and sheer dedication, and laid the foundations for what is now among the biggest film industries in the world.

(Quaid Najmi can be contacted at [email protected])