Nostalgia about scenic homeland and memories not yet faded about the land of the snows overflowed into the rhyme and rhythm at the colourful ‘Himachal Day’ event that was held to mark the 66th Foundation Day of the North Indian state at the India Community Center (ICC), Milipitas in Silicon Valley, California on Sunday. 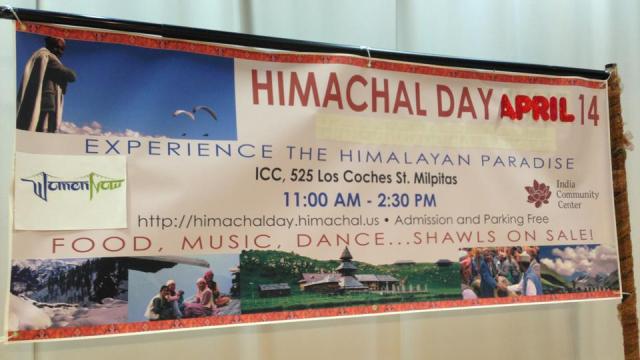 Setting the tone for the day, Jose Esteves, Mayor of Milpitas, chief guest for the occasion said, “You all should be proud of your roots and it is very good to see all the Himachal people coming together here at India Community Center, Milpitas.”

Being an occasion to showcase the rich cultural heritage of the Himalayan state, many people of Indian origins, elected dignitaries and family friends celebrated the event with natives of Himachal who are either settled or working in the Bay Area.

“I learn a lot about my home country when I come to events like this,” said Ash Kalra, a council member of San Jose. “Himachal Pradesh remains on the top of the list of places I want to visit in India .It is very important for people living far from their homeland to feel connected.”

This was the second time that Himachal Day was celebrated in the US, the earlier one being in 2009.

Speaking on the occasion Mahesh Nihalani, one of the organizers said, “I am from Shimla and feel proud to be one of the Himachalis who conceived and started ‘Himachal Day’ in 2009. To bring our Himachali community together and celebrate and share our rich culture and heritage with the people here in the USA, I want this to be an annual event.”

“You all are thousands of miles away but not apart from our hearts,” is how chief minister Virbhadra Singh expressed himself over a recorded teleconference at the function. 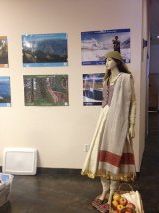 Hill Post and Himachal Media Pvt Ltd, a Himachal – US venture were the media partners for the function.

Reminding the gathering the need for improving basic amenities in Himachal, the chief minister emphasized on the need for healthy linkages between the state and those who could contribute towards improving things back at home.

“I express my best wishes to you all and I am very happy that you are retaining your roots still even though living far away from your state,” said Virbhadra.

More than a hundred guests had registered for the function, but those who turned up were more than what the organizers had expected.

Complete with brass lamps and candles, the stage at the venue had recognizable motifs from Himachal on display.

“The décor, painstakingly worked by two very talented ladies Pranav Sood and Rasmi Bisht, was much appreciated,” said Meena Patyal, one of the organizers.

Many showed interest in Himachal handlooms that were on display at the counters, and brisk sales, especially of Kullu shawls was registered at the sale counters.

Anand K Jha, Consul, Consulate general of India, San Francisco, who was present on the occasion said, “This is a beautiful platform to showcase the potential of Himachal Pradesh.”

To present the native touch, artifacts of Himachal was on display out the hall where the function was held. 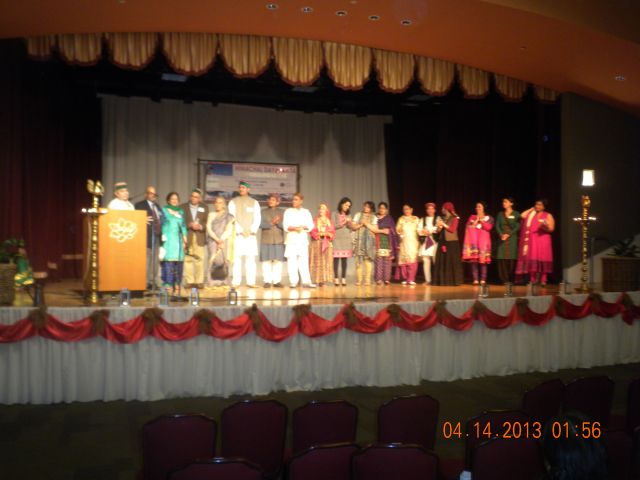 The colorful day event was packed with many dance and musical performances that brought the old and young together to celebrate the nostalgia of a hill culture in an alien land.

Asha Sharma, author of An American in Khadi – a biography of Satyanand (Samuel Evans) Stokes said on the occassion, “I am extremely happy that today we are celebrating our 2nd Himachal Day in the Bay area. For me celebrating Himachal Day at ICC has been a dream come true and it would be nice to celebrate it every year. Apart from the fun it will help people from the state to get better connected.

The trouble taken to put up a table with Himachali cuisine paid off.  “It reminded us of the Dhams we have enjoyed back home several times,” said Kiran Guleria, an organizer of the event.

Kanta Sud, one of the participants at the function. “After living here for so many years, it feels  great to showcase our rich culture and connect with the local Himachal community .”

With pledges to organize an event related to Himachal every year, the gathering broke up, reminiscing a time spent not long ago back in the mountain state.

Formed by the merger of 30 erstwhile princely states, Himachal Pradesh was founded as a commissioner province on 15th April, 1948 and was later categorized a C state of the Indian Union on 26th January, 1950.

After the merger of Bilaspur royal state on 1st July, 1956 Himachal began to be administered as a  Union Territory.

With the Re-organisation of Punjab, on 1st November, 1966 the district of Kangra and other hills areas of Punjab stood merged with Himachal.