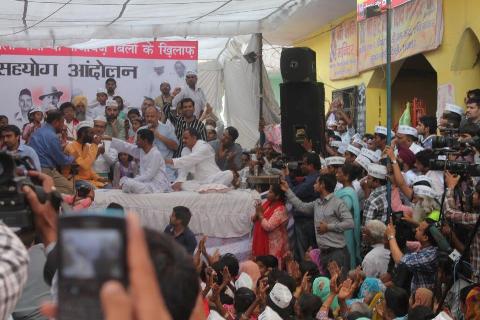 New Delhi: Activist-turned-politician Arvind Kejriwal Saturday ended his 15-day-long fast with a spirited attack on the Sheila Dikshit-led Delhi government for its “inability” to provide power and water – which he identified as key issues for the forthcoming polls.

Breaking the fast in protest against the allegedly inflated power bills, amid loud cheers from his supporters, Kejriwal said that the Dikshit government has no right to rule after it could not make water and electricity available for people.

On the occasion, Kejriwal informally announced the objectives of his Aam Admi Party (AAP), which included waiving off the allegedly high electricity bills and bringing down the power tariffs to half of the present rates.

Kejriwal claimed that the days of Dikshit are numbered and warned her to wait till November – the month when assembly elections are scheduled.

“I am grateful to all those who participated in the movement. After my fast, one thing is certain that assembly election in Delhi will be fought on the issue of power and water,” said Kejriwal, who was given coconut water by a girl called Neeru.

The AAP convenor, who was on a hunger strike since March 23 against the allegedly inflated water and power bills, accused Dikshit of being in cahoots with power discoms and industrialists and warned this state of affairs would not last long.

“Politics will not be dictated by industrialists anymore,” he said.

Kejriwal also trained his guns at the Bharatiya Janata Party (BJP), saying it will do no good too if it is voted to power.

“Both the BJP and the Congress are two sides of the same coin. While the Congress in collusion with power companies hikes the power tariff, the BJP takes to theatrics by staging a protest at the DERC (Delhi Electricity Regulatory Commission),” he said.

Promising 20 liters water for every household in the capital if the AAP is voted to power, Kejriwal proposed ‘Jal Swaraj’ in the capital which envisages the management of water by people.

Asserting that his fast was for the nation and not for power, he said “Had I been power-hungry, I would not have sat on fast.”

The 43-year-old Magsaysay Award winner claimed that it had collected 10 lakh letters against the alleged inflated power bills and warned Dikshit of marching towards her residence if she does not send four clerks to receive the letters at India Gate April 28.