Bangalore: Indian mathematical genius and astrologer Shakuntala Devi, who was dubbed “human computer” for her swift numerical calculation abilities, passed away here Sunday after brief illness. She was 83.

She is survived by her daughter, son-in-law and two grand daughters. 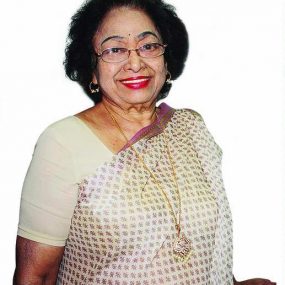 The number-crunching Devi was admitted to Bangalore Hospital April 3 as her kidneys became 80 percent weaker and she also had respiratory problems.

“Even in the intensive care unit (ICU), her mind was full of ideas though her body was frail and weak. She wanted to leave the hospital and return home soon. Trust me, she was full of energy till last,” Shakuntala Devi’s daughter Anupama told.

Hundreds of people, including relatives, friends and admirers were present at her last rites, which was performed in a southern suburb of the city before sunset.

Born here Nov 4, 1929 in a Brahmin family, Shakuntala Devi moved to London in 1944 when she was 15 years old with her father, who worked in a circus company as a trapeze artiste and tightrope performer.

She returned to India in the mid-1960s and married Paritosh Bannerji, an IAS officer from Kolkata.

The couple, however, divorced in 1979 and Shakuntala Devi returned to Bangalore in early 1980s and started offering astrological advice to hundreds of people, including celebrities, politicians and anyone who approached her.

Bannerji passed away in 2010 in Kolkata.

“She was a legend. Really, we didn’t expect madam to go like this. She was very lively and was looking forward to get well soon. But her health was not good and it’s a great loss to all of us,” said Malhotra, who accompanied Shakuntala Devi on mathematical and astrological tours abroad.

As a toddler, Shakuntala Devi was discovered to be a born genius by her father when he was showing her some card tricks.

“When mother was three years old, she was found to be fond of numbers and having a phenomenal memory. She could calculate any equation and reel off amazing numbers in a flash,” Anupama, a director in her husband’s firm, recalled.

According to the Guinness World Records, Shakuntala Devi displayed her mathematical skills when she was six years old at a public function in Mysore, about 150 km from here and two years later, proved to be a prodigal wizard in number games at Annamalai University in Tamil Nadu’s Chidambaram, about 200 km from Chennai.

In 1977, Shakuntala Devi discovered the 23rd root of a 201-digit number mentally. Three years later, in June 1980, she answered in 28 seconds when she was asked to multiply two 13-digit numbers picked at random at the Imperial College in London.

She wrote a number of books on mathematics and astrology including “Fun with Numbers”, “Astrology for You”, “Puzzles to Puzzle You” and “Mathablit”.

She had also set up an educational foundation public trust to promote studies in maths, astrology, philosophy and astronomy.

Shakuntala Devi was honoured with the Lifetime Achievement Award in Mumbai last month.