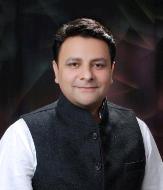 Dharamshala: Himachal Urban Development Authority (HIMUDA) shall Construct Flats at different places in Himachal for the needy people. In the Current Financial year Himuda has given a target to construct 199 Flats, out of which 156 shall be distributed in this time frame work.

The information was provided by Sudhir Sharma, Minister for Urban Development, Himachal Pradesh in Dharamsala on today. He said that 152 flats and 4 cottages are being constructed at the cost of 70 crore at  Baddi Industrial area of Solan district.

The Minister said, “To avoid the congestion of buildings, Dharamsala,Shimla,Solan and Mandi will have its satellite townships. These will be developed by Himuda.” Minister stated that the authorities have already been instructed to identify the land for this proposal within 6 months.

The Minister today Inaugurated a Circle Office of Himuda at Dharamsala , which will cater to the needs of half of the hill state.