Shimla: Himachal Pradesh and Uttrakhand have agreed to jointly set up the 660 MW multipurpose Kishau Dam project, the memorandum of understanding for which would to be signed in the presence of chief minister of both states in a fortnight, top officials disclosed here today. 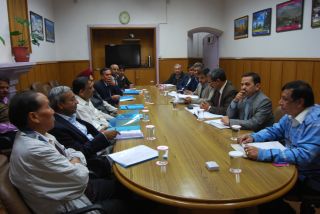 Both states will work in joint venture for Kishau Dam Project and a Special Purpose Vehicle (SPV) would be set up for this purpose, said S Roy, Chief Secretary of Himachal Pradesh.

The two government came about to agree for executing the important project after holding a high level official meeting held here today.

The official team from Uttarakhand was led by Alok Kumar Jain, Chief Secretary, Uttrakhand. Officials of both governments agreed to formulate the terms of SPV by next week.

The project is estimated to cost about Rs. 7193 crore and is expected to generate 660 MW of power.